With Welsh class we had been reading a book! It was Llyfr Glas Nebo (the Blue Book of Nebo) by Manon Steffan Ros, who had also written ‘Blasu’. And they had picked it, I presume, because they knew it was being turned into a play, and we could all go and see that. We steadily read it, a chapter at the time, and we finished it in the very week we'd go to the theatre. 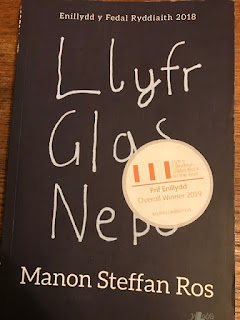 What is it about? Well, the nuclear apocalypse seen from the small north Welsh village Nebo, through the eyes of a woman and her young teenage son. The whole war is entirely in the background; the woman hears about the bombs on the radio, and immediately turns prepper. And soon after that, the electricity blacks out and doesn’t come back on. She retreats to her remote house with her son. And then Wylfa explodes. And they both get very ill.

When they recover a bit they find the world largely deserted. The neighbours have survived but they walk off to a certain death. And there’s nobody else left! Not that she can tell, anyway. They just start growing vegetables and trapping animals and try to survive. And raid dead people’s homes.

The book in the title is a notebook they both write in. They suspect there is barely anyone left on Earth. And the boy is worried that later generations (if any) will not know about the time 'before'. He barely does! His mother, though, remembers it all too well. And they decide to write it together; with both their rather different perspectives in it. You get the nice contrast between the two societies! And you get the strong impression the author does not like modern life. The mother paints herself 'before' as a scared woman in an indifferent, technology-obsessed society. And now there is nobody left she can't care anymore about what other people might think. And she got strong and got on with it! And finds beauty in the world as it is now. The plants they grow, the lake they wash in. The boy sees that beauty too, but is unsure what to contrast it with. He barely remembers the time before! And struggles to imagine a world in which you walk past other people on the street and think nothing of it.

So what happens otherwise? The woman meets another survivor, and has another child with him, but that child, a daughter, dies as a toddler. She never tells her son about the man. There is a mutant hare.

And then, towards the end, suddenly signs of civilisation reappear, in the form of a helicopter and a police car. The mother is distraught! She’s not keen on going back to how things were (surprise, surprise). And then the lights come back on on Anglesey and the book ends.

I quite liked the daily life stuff! Not so much the beginning and end. I thought that neither the apocalypse nor its undoing were very credible. But if you would just accept the premise of this family living their life with only interaction with one other person, and you leave out the end, I think it’s great! Some things puzzle me; why not tell her son about the man? Why not introduce them? Was she scared he would want to move in and destroy her world as she had built it up? The book mentions she hopes the man comes back to get to know his daughter; why not also the boy then? However; I do like the author doesn't explain everything. She didn't do that in Blasu either.

The author is rather prolific and I think I'll read more by her! But first I'll read a Welsh classic. Stay tuned for that!
Posted by Margot at 09:39