New year, new field days! We have our fieldwork module, for which we had already been in the field in the previous semester. We had done Llandwyn island, and the others had done the turbidites of Rhoscolyn (I had been elsewhere that day).

Our next day would be near Cemaes. We had done a recce for that trip in 2018, but one forgets. As I had had some issues with struggling to play a proportionate role in these trips I wanted to be extra prepared. So I wanted to go back and remind myself! And my colleague Suzie was in the same boat. Or rather, she is in a worse boat as at least I was educated as a geologist; she is a biologist by training. So all these tectonics and lithologies and whatnot don't come naturally to her. So I had suggested we go together! And she would bring her son. That would slow us down (he is not even three) but her husband would work over the weekend so he had to come. And getting him some fresh air is an added bonus!

I drove to her place. I hadn't been! It looked lovely. And after an initial coffee we got into her car and set off. It's a bit of a drive! But that's OK. When we got there Suzie put Idris into a waterproof onesie and we were off. You don't move awfully fast with such a small kid but we were not in a hurry! And after a while we got to the first outcrop. I was glad we had reccied; I initially headed slightly too far downhill. I won't do that on the actual day! At the outcrop Idris go some fruit while we talked through the geology. It's the site with the amazing Ordovician conglomerates lying on Precambrian quartzites. The quartzites had been quarried for fire bricks; I explored the concomitant brickworks here. 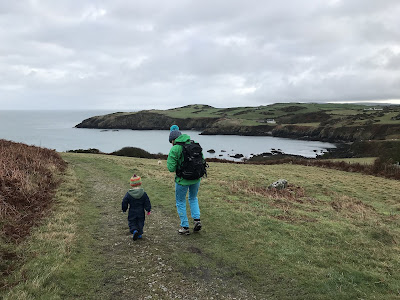 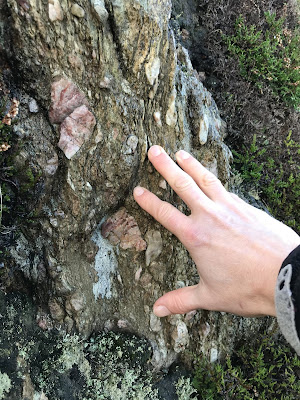 We then went back to the car. The next stop would be Llanbadrig Church! There was an interesting unconformity to see there. And we had just found out there were stromatolites there too! We had looked for them on our recce, but we had been looking in the wrong place. But my colleague Dei had unearthed some information that suggested there were near the church. So we would have a look!

We first had some lunch on a bench. And then we went stromatolite hunting! Stromatolites still exist (I only know of them in Australia) but they are ancient. Precambrian! And soon we found them! They were lovely. Even Idris was impressed. Even though I think he was even more impressed by the possibilities a certain rock offered to let him pretend he was on a boat. To each their own! 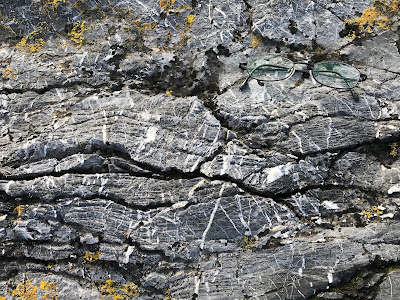 Stromatolites! And glasses for scale.


By then we had exhausted his patience and we went back to the car. By now Suzie had to carry him! And on the way back to Suzie's he fell asleep. It had been, he had declared, a Long Walk.

Funnily enough, Dei went recce-ing too. He texted us he was at the church just when we hit the main road. Oh well! At least his later texts suggested he had found the stromatolites too. But not surprising; we had only found them thanks to the documentation he had provided.

At Suzie's we had a cup of tea (or three) and I had a flirt with her handsome cat, and we even did a puzzle with Idris, and then it was time for me to go home. Mission accomplished I think! Bring on that day in the field!
Posted by Margot at 08:34