Merging and spicing up lectures

I had been lecturing on my 'Earth, climate and evolution' module since forever. I used to have six lectures: two on climate, two on evolution and two on the Quaternary. Two colleagues would do things like rocks, the formation of the Earth, plate tectonics and historical geology up to the Quaternary. But then last year I had to take over from the chap who had done the bulk of the lecturing. He had retired! So I spend a lot of time over the summer familiarising myself with what he had been teaching. And in spring, I taught it.

When preparing I did notice there was some overlap between his lectures and mine. Now I was doing both, I should iron that out! And I also wanted there to be a bit more action than just me standing there, talking. So this year I went back to these lectures, and tried to make them a coherent whole, and add some interactivity. For the latter, I used 'Kahoot'; some site you can use for asking MCQs (and other types of questions) that people then answer on their phone. I made sure I put some questions in that were either exam questions or questions quite like that. Then the students have already thought of such questions! The exam is MCQ, and we don't publicise old MCQ exams. We do with open question exams, so the students know what to expect.

It was a bit of work but it seems to be paying off. The first lecture I used Kahoot it clearly livened things up! And I am feeling better about teaching the bits that previously overlapped. It's time-consuming but in the end I think it will lead to greater satisfaction among both the students and me! 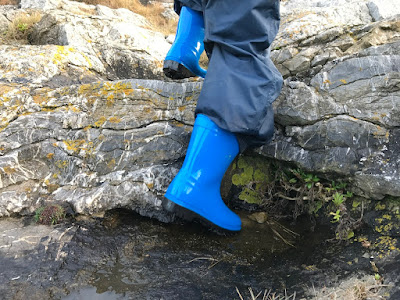 A stromatolite with toddler wellies for scale (taken on our field day recce); the stromatolite features in one of the lectures