When I walk to the supermarket I walk past Neuadd Ogwen. And recently I saw a poster on the door. It advertised 'Atgyfodi' (to resurrect) without much explanation. I decided to look up what that was. The website said it was a combination of two films: one an amateur film made by pupils from a school in Bangor about the reservoir that drowned the village Capel Celyn. It was made at the time! So it started with images of the pristine valley, and village life going on, and also documented the houses being evacuated and then torched (not sure why that!) and then submerged. Slick it was not but interesting it was!

The second film was a sort of an art project. A bloke had had a rummage through the archives of the national library and St Fagans National Museum of History, and pulled out lots of images and snippets of dialogue and suchlike. And then he had gone out and shot more footage, and recorded more sounds, and then blended it all together to form some sort of multimedia collage. I like history and I can use some practice with my Welsh, but I had to just appreciate this as art. The sound fragments were generally played several at the same time and then with music over the top! So I couldn't make out a thing. The native speakers in the room couldn't even make much of it. So that didn't quite work out! But some unapologetic culture without educational purpose doesn't go amiss either.

Altogether it was a longish night; it was supposed to start at seven, but the projection didn't start until half past. And after the collage, there was a Q&A with the rather talkative artist. So I wasn't home until 21:30! What a wild night out! 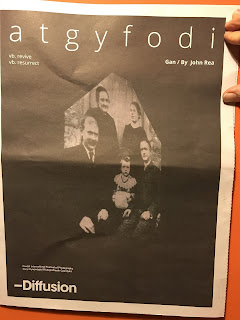