We had read the book 'Llyfr Glas Nebo' in Welsh class. And now we'd go see the play, in Galeri in Caernarfon. (The Welsh tutor who had organised the tickets lives in Caernarfon; hence that we didn't go see it in Pontio in Bangor). I had not been so I liked the change! And it wasn't bike weather anyway. 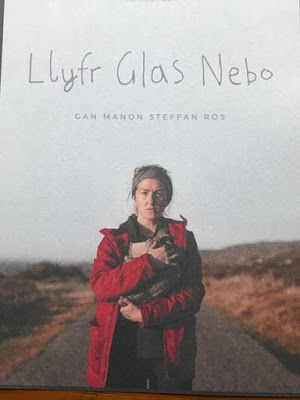 I summarise the plot in the previous post. And how was this expressed on stage? I was about to find out. It started. Lots of people were on stage, everything happened at the same time. The toddler was already there, but the woman's hairdresser colleague from the olden days was still there too. So this was a compilation of different times. Confusing! And then we got into the narrative. Times were quiet. The toddler was already ill, but things were ticking along. They were growing vegetables and trapping animals. And they found the notebook which would be Llyfr Glas Nebo.

The toddler was a puppet. That worked OK! After the first minutes you look past the people operating her. And the woman and the son were very believable. The actor playing the son was clearly older than the son himself but not in a distracting way.

Later you get a flashback in which the war/nuclear accident happen. The time change is mainly done by the boy wearing a clean shirt and playing younger. And then neighbours are introduced. These were rather cartoonish, but well, the play has enough misery in, so a cheerful note was an understandable choice. And then the shit hits the fan! The Wylfa explosion was done well with sound and light.

The play didn't quite have the same level of detail as the book, of course. There was much less criticism of modern society in it! And much less the subtleties between mother and son. And much less the details of their efforts. And I probably would have wondered a bit what the mutant hare (also a puppet) would be doing there if I hadn't read the book.

What I thought was a bit of a stretch that they have the posh neighbour also play the other survivor, without much change in looks. But maybe they thought a fake beard would be a bit too fake. In the book he sure has lots of facial hair!

The book ends with the return to modern society as heralded by a helicopter, a police car, and the lights coming on on Anglesey. And even though these first two are really easily simulated in a theatre, they weren't there! And the play ends with mother and son standing on the roof of the lean-to, and then a backstage light comes on and the play ends, but without the book I would never have guessed that that were the lights on Anglesey (as I assume they were). Oh well!

So what do I think in the end? As good as the cast was, I prefer the book! More space for subtleties. And these are, in my view, the best bits. And I am a LOT better at reading than listening in Welsh. I sometimes struggled to make out what was said on stage. (Our tutor later said even she struggled to make out what the mother was saying, so it wasn't just me!) But that also means I need the practice!

So altogether it was fun and useful to see the play. But I'll be going back to reading now. And listening to Radio Cymru. A good balance of doing what I'm good at and enjoy, and doing what I'm bad at and need practice in. I just have to get familiar with the schedule; It's Six Nations time now and that might feature very prominent in it, and that's not the kind of radio I'm looking for!