The previous week I had not been Thursday Nighting because Monique was here. The week before I had only made it to the entrance. The week before I had been in an exam feedback session until so late I couldn't come out underground. I hadn't done any proper Thursday Night underground faffing, be it in the dig or elsewhere, for a while. But now I could again! And we would be lugging scaff up a steep slope so all extra hands were appreciated.

We were making progress on a long-term project in there; there is a through-trip in Wrysgan, but with a tricky bit in it. It's a bit unstable, and we would not recommend people to go there as it is. But we had been thinking of shoring it up for a while, and now we would actually make a start with that.

When I got to the parking lot I saw David and Phil. David looked mischievous. He said he had done the work already! He had dropped the scaff off as far as he could drive it. Miles had left the gate open for him, and he had been so early he had already done it before anyone else showed up!

The others arrived. Lots of them! Edwyn, Jason, Kate (not Bob) with two friends, Ed and Simon. And Miles! I didn't expect him to show up there as he was supposed to be in Cwm. But then again, if Miles says he'll be in Cwm the whole day he often won't get there until 6. So that he drove up rather than down to meet us was not that strange! And he had been in the area earlier on, and had then left the gate open for David.

As David was in his Landie, and it's quite an unusual car, and the TN are car people, quite soon the bonnet came up and a horde of men was staring down into the engine. Typical! 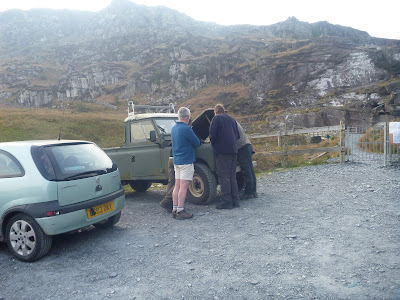 I had packed the usual: hat, gloves, knee pads, sarnies, fruit, tea, and in this case, SRT kit. We would want to bring the scaff to where it was needed, which was up one slab. One needs SRT kit for that! But then Ed said we would probably only have time to bring it to the hole, and not for putting it in position. Two people hauling would be enough. He had brought his SRT kit but didn't expect to use it. Then I took mine out of my bag! No need to drag that fruitlessly up the hill.

As we had two big Landies we did the easy thing and drove (or were driven) up. We found the scaff and starting to carry it up. The first people carried their poles to some bit halfway up and then went back to get more. We had more scaff than people! But I was a bit at the back so I figured by the time I would get to the bottom all scaff would be gone, so I went on to the top. By then my shoulder felt uncomfortable! On the way we had met three people with a handsome dog. And when I walked down to get an extra pole from the stock halfway up I saw one of these people come towards me with a scaff pole! That was sweet of him.

I carried another pole up and then all was at the entrance. Time to put on our hats! Then we carried it all to the bottom of the slope. We were a well-oiled war machine! But that did mean we might have more time than we thought. Edwyn had already left for some reason. Miles left fairly soon too; de didn't have SRT kit with him and would be of little use after the lugging stage was over (he's good at lugging!). Phil and Ed scurried up the slope. Jason offered to lead Kate, her friends, and Simon to the other side of the wormhole (the unstable passage). David and I attached the poles on by one to the rope so Phil and Ed could haul them up. But once that was done David put on his SRT kit, and I was a bit useless! But that was OK because I was still very tired and didn't mind an early night. It was something like nine when I left but it takes a while to get back to the cars, and then there's the drive.

The next day I gathered the others had made some good progress after I left. I don't think it's all done yet but this must have been the crux of the work! Soon there should be a spiffing custom-made through trip! Cool!
Posted by Margot at 06:54