For a while, there was quite an SOS presence in the ThursdayNighters! We had not only David and me, and sometimes Kate, but also Ed. He was a PhD student on the project I had done my postdoc in. But he had finished, and got himself a job in Southampton. So he was gone! But the thing about PhDs is that they have to come back for their viva's. And this week, Ed was back! I didn't see him before the viva as I had student presentations, and I didn't see him straight afterwards for the same reason. But I caught him when he came out of the pub where he had had a celebratory drink! But later we would take him underground. Would he have arranged it so that he would have the viva on a Thursday? Not unthinkable!

When he had mailed he would be coming with us, and wanted a slate trip, Phil suggested Diffwys. It would be a trip involving an abseil and a boat trip (as not everyone wants to swim). Phil had a boat. Simon said he had one too. And we would need a rope! And Phil suggested the bolts were not very good anymore and might need replacing. So it would be a bit elaborate but it would be spectacular enough! But then the weather forecast went awful and people started having doubts. And then Simon pulled out. And we weren't sure anymore of Phil. Hm! Oh well, there are more mines in the Blaenau area.

I packed all my neoprene; this trip is notorious for the boats prematurely deflating, and I figured there should at least be one person who would be dressed for the water temperature. And I hitched a ride with David. He changed into his caving suit at my place and I changed into the clothes I intended to walk up in. No use donning the wetsuit at the bottom of the hill! And through the torrential rain we drove to Blaenau. And by then we knew Phil would be late! So no boat. When we got there, Phil seemed to be out altogether. We rallied the troops and went to Wrysgan instead. You can't do that trip with a skinny bloke who doesn't own a wetsuit if you have no boat! And to my relief, Ed was relieved at not having to lug a rubber boat up the hill in atrocious weather, rather then being disappointed at not visiting a new (and exciting!) mine.

We chose Wrysgan as it's nearby, it's not a big slog from the parking lot, and Ed hadn't done our rather new through trip yet. And there were only five of us! Iain and Ed (who had come for the first time the week before) were with us too. We walked up past the heavily swollen river. And we got in! The pitch at the end of the through trip is readily rigged but Ed and I decided to go have a look if all looked well; we didn't want to end up at the pitch only to notice that someone had nicked the rope and we'd have to come back the way we had come. Ad the rope was still there! We also noticed a lot of water coming down...

We made out way up. We had a nice pootle. And not too high above the pitch we ate our sandwiches. And then we got to the Wormhole. It had a waterfall going through it! Not very surprising, really. But well, we'd have to get through. I had decided to not put on my caving suit; I was wearing my caving waterproofs for walk-in trips. So I had a hood! I put it up, climbed down, and plunged through. It wasn't too bad. Then I waited for the next person to come through. I could maybe take a picture! And after what seemed forever Ed appeared. And I managed a picture! And when he was down I decided to get out of the way and I went to the pitch, and descended. 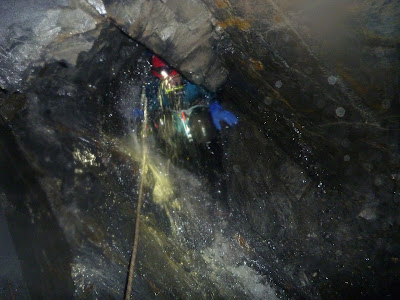 Ed comes through the Wormhole

The others appeared too. We took our SRT kit off and walked out. It was still quite windy but not overly wet! And Ed had had a good trip. That's important! And he'll be back in summer for his graduation ceremony!
Posted by Margot at 08:46