It started in the late fifties. Liverpool needed drinking water. More drinking water. And the idea was formed to drown a valley somewhere not too far away and use the thus constructed reservoir as storage. And they chose a valley: the one of the river Tryweryn. On what base? I don't know. But it was in Wales, and it had a village in it: Capel Celyn. Did that do down well with the inhabitants? No, of course not. But it was down to parliament. And for every Welsh person, there are about twenty English ones, so there was no stopping the English vote. That village got evacuated and the valley was flooded. This also flooded a railway line; Bala used to be accessible by rail but the line went through the valley.

In 1965, a Welsh journalist decided to vent his anger in public. He painted 'Cofiwch Tryweryn' ('remember Tryweryn') on a wall, somewhere near Aberystwyth. And in the decades after, the slogan has been vandalised, repainted, painted over again, corrected (the journalist forgot to use a soft mutation), and whatnot many times. And in February 2019, it was vandalised again. And that time, the Welsh figured they'd fight back. Maybe thanks to social media? But from then on, messages of 'Cofiwch Dryweryn' started to appear all over the country. Bethesda has one. Roman Bridge has one. Lots of places have one! And even the room where I have Welsh class has one. So now the message is spread wider than ever before! I don't think Capel Celyn will be forgotten soon. Come to think of it, 'Cofiwch Gapel Celyn' would make more sense... 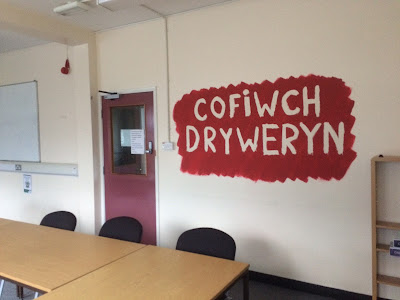 The message in the room where I do my Welsh class
Posted by Margot at 10:54