When I bought the house, the doorway to the living room was really really narrow. That was a pain in the bum! And why was it? I don't think that doorway was original; it would have been too close to the front door, which is now in the extension. And there are two relict doorways on the other side of the house. But a doorway had been put in once, with a door frame which took up some space so make it narrower, but then the door had been moved to the landing side of the door opening instead of the centre. But the frame had been kept in place! And then some heating pipes had been put in, on the  inside of the frame. That took up even more space, And then a thin sheet of plywood was put over the pipes to protect them. Even more space lost! And my friend Jitske had taken off the plywood and the bits of wood that kept it in place (on the side, that is; there was some left at the top), and I had the pipes moved, and had then removed the redundant door frame. That had made some space! And the plasterer had covered up the damage of the moved pipes, and the painter had painted over that. All good!

But the top of the doorway was still ugly! It was a sheet of plywood, with some moulding to make it look tidy. But that only reached as far as the old vertical plywood sheet. And it had also only been varnished there! So I needed to act. And I decided to rip off the moulding, make the edge smooth with filler, and paint over the entire thing. And I did! It wasn't too much work. So that eyesore is gone now too! Success! 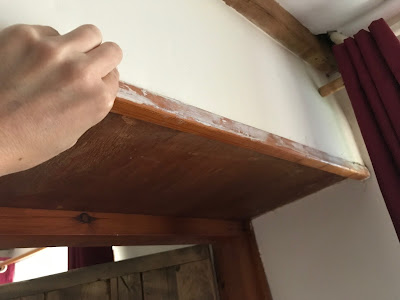 The plywood and the moulding (held in place; I forgot to take a picture before I ripped it off) 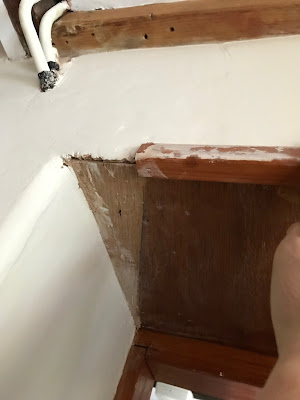 You can see where the vertical plywood reached 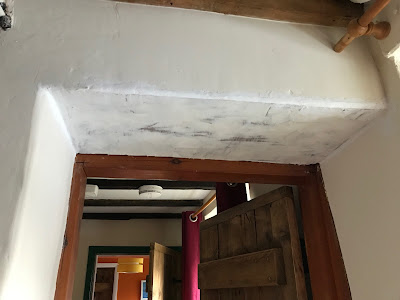 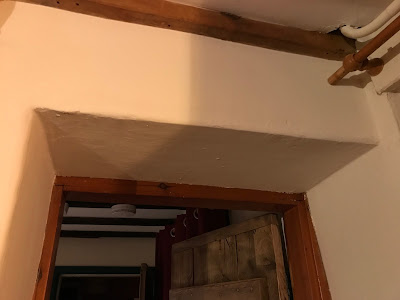 Now it blends in with the walls!