Windy day in the field

Every year we go into the field with the second year's students. We used to take them to both the mountains and the beach. But this year I wanted to do something different.

The idea was we reconstructed the direction of an ice body in two places; using striations in the mountains, where the environment is largely erosional; and using till fabric at the beach, where the environment is largely depositional. Striations are the scratches a glacier can leave in bedrock by scraping rocks over it. Till fabric is the preferred orientation of clasts in till which result from the clasts rotating to align themselves into the direction in which the sediment is deformed.

Traditionally, the students did a lot better in the striation part. There they hopefully discover that there are two generations of striations to be found in that area; one set from the Last Glacial Maximum that goes in the direction of the ridge with the Pyg Track on it, and one from the Younger Dryas that just follows the valley topography. (And no I don't fear next cohort of students will read this and take advantage of the information. As matter of fact, we hand it to them anyway. But that isn't necessarily enough!)

On the beach, they are supposed to notice that even though the topographic gradient dips north, the clasts are aligned east-west. That's because the local glacier got diverted by an ice stream coming down the Irish Sea. But they never get that! They tend to end up with data that shows them aligned north-south. I suspect this is bias; they want that to be true so that's all they see. And it's interesting to see they often have the ice go south instead of north. That really isn't very likely! And that may be a combination of expecting the clasts to be aligned north-south, but having forgotten to have any expectations on which way they would dip.

The thing is, the lectures don't even go into till fabrics. And I don't want it to! There already is so much. So I decided to ditch the beach part. That would make the trip half a day only. Is a bit less trying! And I figured the results would be better. So a half day it would be!

Two days beforehand, on a Sunday, I got a message form my colleague Lynda that the road to Pen-y-Pass, where we park, was closed. Oh dear! That Monday I investigated and indeed; on the Gwynedd County website it said the road between Nant Peris and Pen-y-Gwryd would be closed. Oh dear! That means parking at the latter location and walking up. Google Maps figured it would be half an hour. But we only had the students from 9AM to 1PM and that included the drive! Which is longer to Pen-y-Gwryd! So we would probably have a very short time at the actual site. Oh dear!

The students would come by bus. We would have David in a department vehicle, as we wanted to have back-up in case someone would get injured or something and have to turn back. So we made a plan: David would pick me up, we would check the situation out, and try to report back to Lynda in the bus. And so we did! We saw the road was actually open between Pen-y-Gwryd and Pen-y-Pass. Great! But we had no phone signal. We drove back to Pen-y-Gwryd and waited for the bus. We told the driver he could actually park at Pen-y-Pass! And so he did.

One there we got everybody together, distributed gear, and started to walk up. It was a blustery day! When we got up I did my usual spiel: find a patch of striations (just one, otherwise the location map becomes too complicated), have us check if you are in any doubt if they are striations, measure them, put your location on the location map, and then see what other groups have done as you have to work with their data too. And they were off!

Lynda, our assisting PhD student Katie and I walked around to see if all was well. Did they find striations, did they not mistake other lineations for striations, did they measure them correctly? And when it looked like the first groups were done I settled down with the location map so students could come and indicate their location.

When all groups were done I did a debrief. What directions had people found? Was that in the same direction as the valley? Yes it was! Was any other direction found? Yes! One group had a direction towards the ridge. So that must have been a different ice body! Then I suggested the students go and have a look. They had to write up the whole data set! So if there were two generations of striations it would be best if they had seen that. They looked at me in incomprehension. I was baffled. Really? They all started off downhill. But then at the last minute I was glad to see they all veered off anyway, to the magic site with two sets. It was a bit of a weird one; it was only just on my map. None of us staff had ventured all that way. And we got there, and there were no striations there. Oh dear! They had mistaken cleavage for striations. That was a disappointment! But what can one do. It was time to go. We walked down. I hoped there were more students who had found the one rare direction, but had either not noticed it didn't follow the valley, or had been too shy to speak up. That's far from unthinkable! So we went back to the cars, and collected the clipboards, data sheets and compasses. And went back to Bangor! Where I could fling the data into excel, and see what they had found. Hopefully more than they realised themselves!

And next year? I will book more time so we are not in trouble when the road closes, and we'll have more time to check the various group sites. I will have to somehow get the students to see them all! I'll have to ponder how. Make them sketch them all? For part of the grade? I'll have to ponder that. I'm determined to make them get out of this trip what is in there! 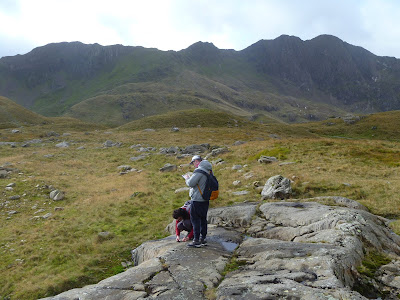 Students on a striated rock 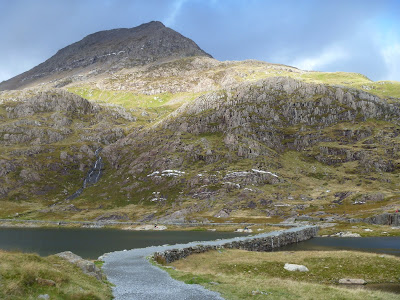