It had seemed so recently we had had a bit of a bungled trip in Pant-y-Wrach! But it had been almost two months. Doesn't time fly! But we came back to finish the job. We knew what we needed.

I was a bit apprehensive about the trip after the week before, but I also figured I needed to get back in the saddle. So whether I could have gone to the dig or not: I was going to be there if at all possible. I was timetabled until 5pm, but I was done a bit early with my lecture, so I made it on time. I was even a bit early! I was the first to get there. Soon David appeared too. And then Jason and Edwyn. We kitted up. We found a slightly different route up but it was still steep and a bit trying. But we got there!

Edwyn had left the ladder last time. I didn't see it! But he had hidden it quite well. Soon he had retrieved it and we started to descend. Things were going so much faster than last time! We did the traverse. Then we rigged the stope with the false floor a bit better. And then went onwards! Soon we were down the next pitch too. I had not got that far the previous time! The level below was very small. And there we had to re-rig a pitch. David did the honneurs. And soon went down! And we followed. I explored below a bit and then we were on our way out. It got a bit wet but I was wearing wellies and two pairs of neoprene socks this time! So it was OK. Soon we stood outside. I don't mind short trips! And this time we didn't go to the pub afterwards. Not sure if that had anything to do with the week before! 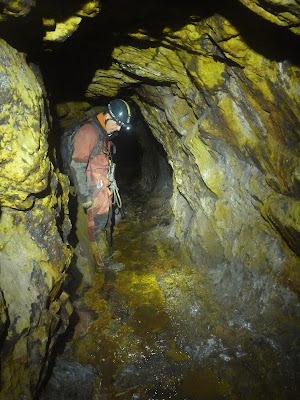 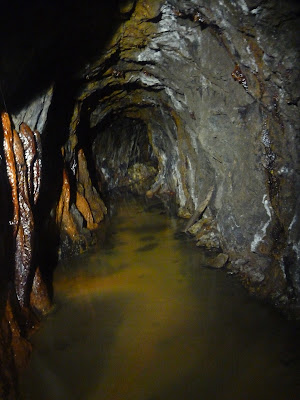 The dead-end other side of the bottom adit 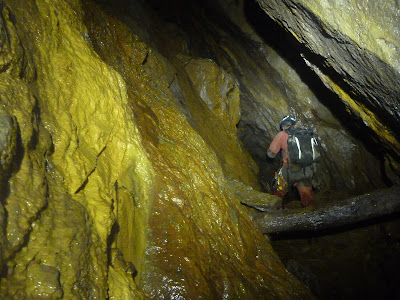 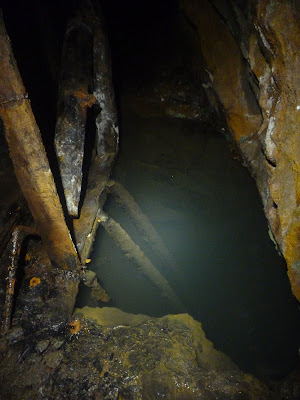 Winze into the murky unknown
Posted by Margot at 09:12