I was a bit apprehensive. Everyone said plastering was difficult! But I had this partial wall that really needed it. I really had to give it a go. On a Tuesday morning I popped to the local DIY shop to get supplies. I figured I’d just go on my commuter bike, get the stuff, dump it at home, get my work bag and bike away.

All was well with the trowel and the PVA (for sealing the plasterboard) I needed, and the extra polyfilla I was buying. But then the plaster. The smallest bag they had was 25 kg! And I was on my 7 kg road bike with pannier! Oh dear. But I was committed now. I put the bag in the pannier bag and hoped for the best. I walked the bike home! It was very unbalanced. I suppose it would have been better to have had some elastic straps. Then I could have put it on top of the pannier and the whole thing would have been less unbalanced! I got home. First hurdle taken!

The first thing was to apply a layer of PVA. That's easily done! And that would be the sealing layer. A bonding layer would have to be done just before the plastering as it would have to be still wet.

I figured I should do the plastering early on the day, so there would be time for disaster management! So on a Saturday morning I mixed my plaster. When it was done I added a layer of PVA to assist the bonding of the plaster to the wall. And off I was! I quickly noticed the first pitfall; if you let your trowel stick to the plaster (as in, not keep it at a slight angle) you can only pull it off with violence, thereby creating some sort of artex effect. Oh well! Easily smoothed out. 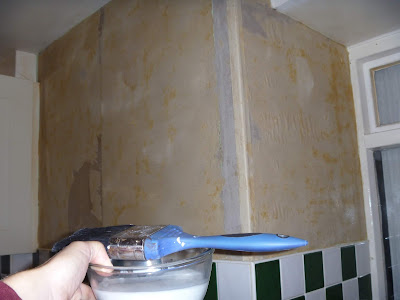 
I did make an awful mess. And you have to be careful with what you do with it! Take it off with a cloth and then rinse out the cloth under a tap risks clogging up the drains.

I am also bad with the edges; I tend to cheat and do these with a palet knife. The end justifies the means! But in the end I got all covered. And cleaned up. 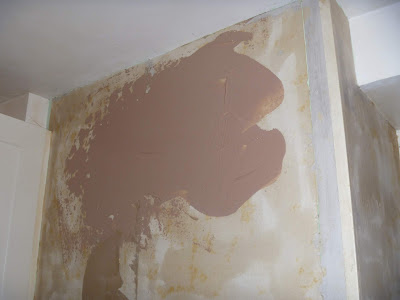 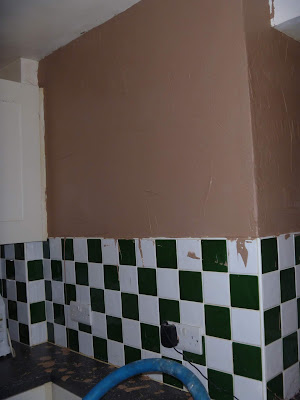 After the first layer; notice the plaster everywhere!

While waiting for the first coat to dry I pulled some more wallpaper from the other wall. Big holes in the old plastering appeared! Maybe I needed to do something with that too.

When I started on the second coat, the plaster had thickened a bit. It actually made it easier! Maybe next time I should start a bit thicker. This time I barely made a mess! So when the coat was on I only needed a few minutes to tidy up and then I could admire my work. A professional plasterer would hate the look of it but for me it was great! I don’t like my walls smooth anyway. It will do!

I then decided to use the left-over plaster for a quick repair of the holes in the plaster of the other wall. And what was left then went into a plastic bag for disposal. 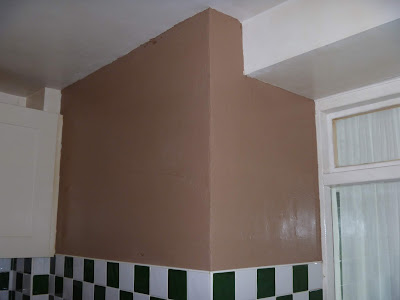 So now I could tidy up, and wait for it to dry! And once it is dry I can paint it. And I think not much later I can do the back wall. And then things go fast! Then it's a case of moving the furniture off the side wall and do that one too.

Is that it then? Well, no, the ceiling can do with a coat of paint too, but I am hesitant about that. Painting ceilings is a pain! But would the painter come over for just one ceiling? And I suppose I can do it myself but then you need to do the entire kitchen. I mean, the ceiling is above everything, evidently! So none of this only doing one side of the kitchen and being able to just keep using the other sides. And I would need to first wash it. It's got a big fat nicotine layer on it! And after washing it it'd need a special layer to keep the nicotine (no way I could wash it all off) from showing through the paint. Sounds like a lot of work! I could see that end up on the lower end of the to do list. And somewhere near the bottom is 'do something about the kitchen in general'. The kitchen cupboards have lots of nicotine staining in them too. And the doors are ugly. It's MDF with a plastic coating! Not pretty. And on some of the doors the coating is coming off. So one day I'll have to do something about that too. But that's really a long term plan! And for now I'm just excited about ending the rule of both mint green and wallpaper in this house...
Posted by Margot at 07:48