Some weeks ago I had gone for a walk with my colleague Kate. And that had been fab! So we had both been travelling but were now back, and we had decided that provided an opportunity to do something similar. But this time, we would only use half a day. On Saturday I was busy with other things, and on Sunday the weather forecast said lots of rain in the morning but a fairly dry afternoon. So we needed a shortish but nice trip. I suggested Lliwedd mine. I had suggested to the Cornish to go there but they had already been there. Now Kate and I could see for ourselves!

We met up on a layby near the start of the Watkin path. And got started! It still rained, but the advantage of that was that there weren't many people around and there had been parking space. And we set off! Luckily this kind of landscape is beautiful in the rain.

It was also a blessing to walk with a woman, and specifically a woman who spends a lot of time surrounded by men! When I mentioned the remark Mick had made the Thursday before, she didn't need any more explanation; she immediately said something like 'ah, and then you called it out, and then you were the bad guy, and the men didn't quite see what had been so problematic about what he had said in the first place'. Spot on! So lovely to not have to wade through treacle to explain how such things work. A bit sad, though, that this is so bloody evident to the first women you talk to. Probably to any woman. But we were no there to ponder that. 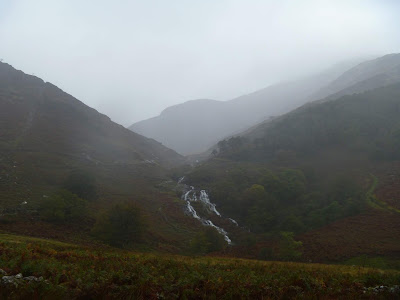 View near the start of the walk

We were just walking up until where we expected the junction to be. And it wasn't there! Only then did we get the map out and have a look. We had overshot considerably! Oh dear. But no worries; we just went back down. And found the junction. On we went! 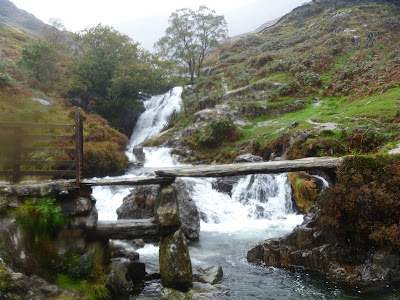 The bridge near the junction 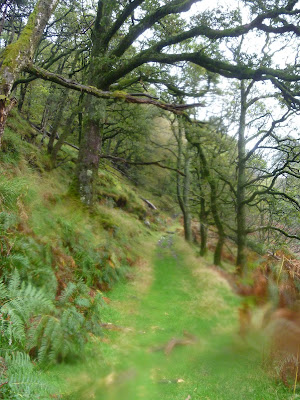 The path just beyond the bridge

The landscape was lovely. The weather a bit variable! It was supposed to stop raining at about three and it did. Great! We even got some sun. And after not too much time we saw something that looked like spoil. Would this be our mine? And it was! And there the path stops. It must have been the path over which the produce of the mine was transported. And that the miners used too! 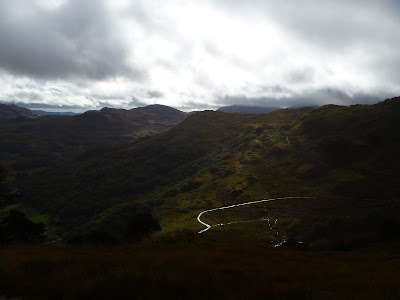 The Watkin path reflects the first rays of sun 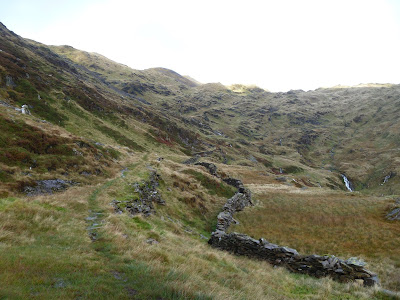 First traces of the mine

We admired the spoil heaps and the waterfalls that probably were a bit more ubiquitous than normal. And we saw an adit! But it was quite wet so we didn't want to go in. Instead we started our way up; we knew the actual mine was higher up on the hill. So we started a slog up the spoil heap. And soon we came to the first sign of the actual stope. I had expected to be very limited, but this place went down to the centre of the world! It was very impressive. But we were not equipped to go in. If we want to do a proper explore we have to one day go back with drills and ropes and whatnot!

For now we restricted ourselves to a cup of tea in a slightly sheltered spot. It had started raining again! That wasn't ideal but there are worse things. And then we went onwards. 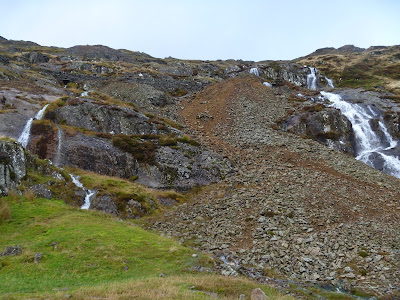 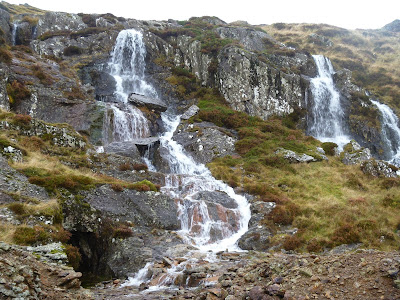 The adit in the lower left corner 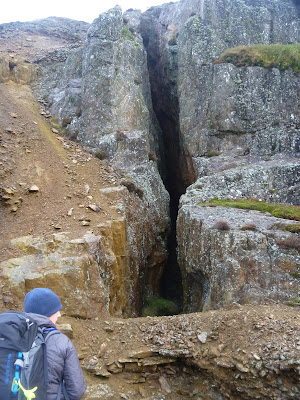 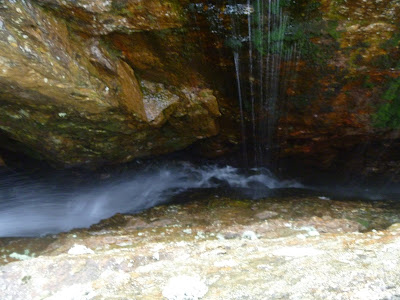 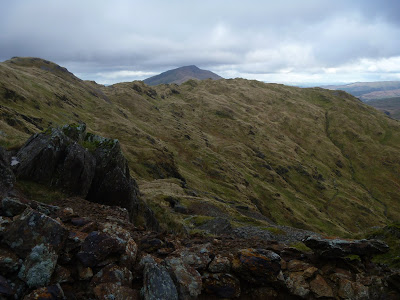 When we reached the top we had to come back. We decided we would try to avoid the spoil. It's difficult to come down very steep scree without falling over or twisting your ankle or something like that. We tried the soggy grassy slope. And we got so far but had to go back to the scree at some point. But it was OK! And we got back to the path. And from there the rain stayed away and we had a lovely walk down.

It had been a good trip! Good company, beautiful landscapes, and a great mine! Yes we now had to hang out quite some soggy gear but that's a small price to pay!