Checking out a few levels

Some time ago (in March!) there had been a plan to go and check out some minor mine workings on the banks of the river Ogwen. That day the river was a bit high, so we went elsewhere instead. But that meant we still had these initial workings to look at! And in mid October we finally came around to it.

It was again Phil and Chris; they appeared on a fairly sunny morning. We first had coffee. Then we got ready. The men got into their hiking boots and I into my wellies. And off we were!

Chris took us to the river. He pointed out where some trials were that he wanted to do on the way back, near the road bridge to Hen Durnpike. Now we turned to the old rail bridge that is part of my standard commute (but I come over the other bridge if I take the alternative route). We scrambled along the somewhat slippery riverbank until we got to a stope. It wasn't big! But it was nice to see. Chris said it was called Coetmor mine, but on AditNow calls it Coed y Dinas. Confusing! Generally Chris is right. 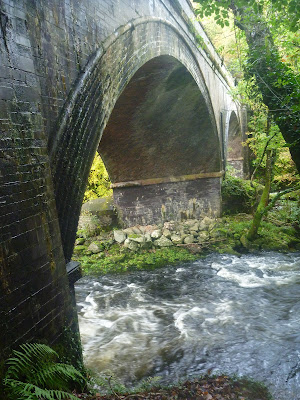 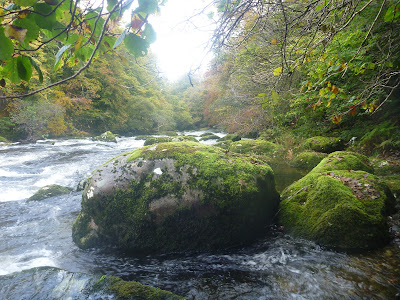 The river in its autumnal glory


We then clambered back onto the road, and from there walked back to where we had started. Then we checked the last two entrances we had left to the end. They were modest too! But it was nice. 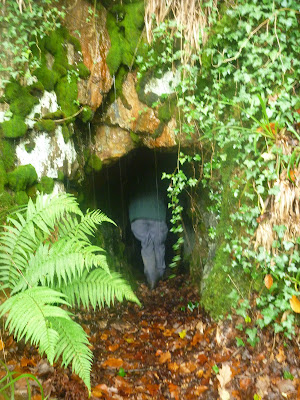 Going into one of the trials 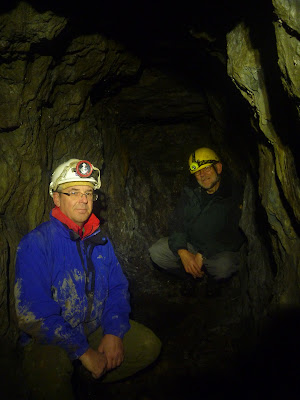 Phil and Chris in the trial

We then went back to my place to change back and have more coffee. So the mining was modest but it was a nice little outing!
Posted by Margot at 07:03