Progress in the dig

I was a bit nervous! The dig is in a difficult state. But it often is, and we always get away with it. I hoped we would manage to make some progress. The previous time we had set off two charges and it would be interesting to see what that had done.

When we walked from the adjacent chamber to the start of the dig I turned around to say something to Miles. And my eye fell on some scribbles on the wall. Cool! We have been coming here for three years; how could we not have spotted this? It was some kind of calculation. I quickly took a picture! 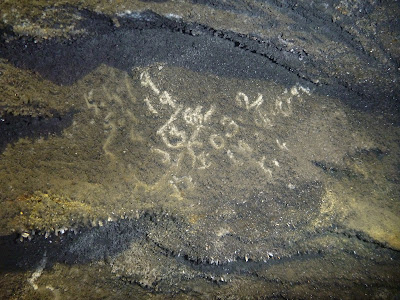 I was up first. And I saw the blasts had caused a lot of rubble! So I shouted down to Miles that he should stay clear while I threw it all away. And when I had thrown the worst away except one big one that couldn't fit down the hole as it was. We needed to make that smaller first!

Miles came up and started on splitting the big rock. And smashing the slabs he chipped off. I pulled rocks out of the wall; the blasts had loosened quite some stuff. I had to stack the bits off to keep them out of Miles' way. And together we made quite some progress! The big slab became lots of small bits and vanished. I pulled a lot out of the wall; quite some was quite big too, and needed to be split first too. And all that in the end vanished down the hole too. We threw so much down! Miles said we only had a few inches of clearance at the bottom of the vertical bit but I trusted he was exaggerating.

Towards the end, one of the big slabs that had been standing diagonally started to move. Scary! But it couldn't go anywhere. It just calmly lowered itself until it ended up resting on another rock. We would have to get rid of this the next time! It's in the way a bit. But we have made so much more space to move now! And that's good. That means you can be in various places while trying to dig up. And not necessarily directly underneath what you are prodding! Especially important is that there is more space to be underneath the solid ceiling to be and hide. I feel a bit more optimistic now! Bring on a next session... 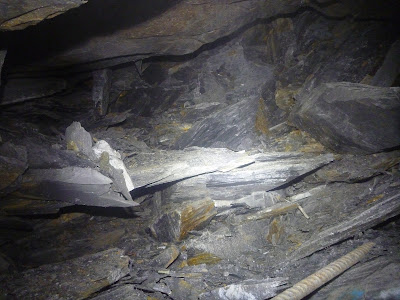