Jitske rips through the house

I remember one snow hike when we had stopped for the day. We had pitched our tents, but it was cold, and people were doing all sorts to keep warm. There was little chance of us managing to light a fire, but that didn't stop people from gathering firewood. That warms you up as well! Any resulting fire is bonus. And I remember seeing Jitske push over a tree. And why not!

With that imagine in mind, I don't think it surprises anyone that when we had most of the day left after our hike, she was keen to help in the house. And if you then give her a crow bar and point at something saying 'this must go' its time is up. We first did quite some wallpaper stripping (not very heavy work) but then I had her remove the skirting boards, remove all the strange woodwork that was covering the pipes in the doorway, take out another ceiling which I had left in place for now for insulation reasons, and demolish the inside of a cupboard that was kitted out for hanging clothes in, but which I prefer to kit out with planks.

In the meantime I took the nails out of lots of removed bits of wood (both newly produced and having been lying around for a bit) so I could use it for firewood, removed some superfluous beam from the living room, and finished the removing the plasterboard from between old and new ceiling beams.

We stopped for tea in the garden when the sun came out. The view has to be enjoyed! And we had to also, of course, stop for lunch. Jitske would spend hours in the train later that day, so I figured a hot pub lunch would not go amiss. But after lunch she simply continued. We also removed two slate slabs from the garden, and did some pruning and moving plants. And eating plums. The house looks profoundly different now! Great! Let's hope work speeds up a bit now. And I hope she comes back one day to see the finished work! If a house ever is finished... 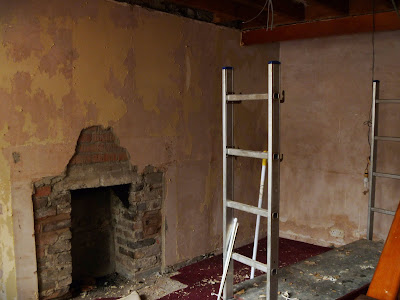 No wallpaper, no skirting boards! 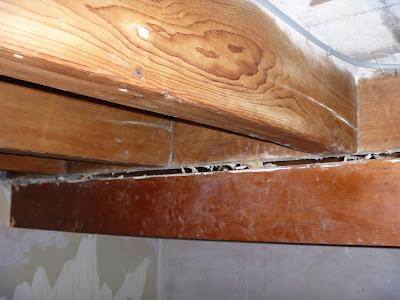 No plasterboard between the beams. 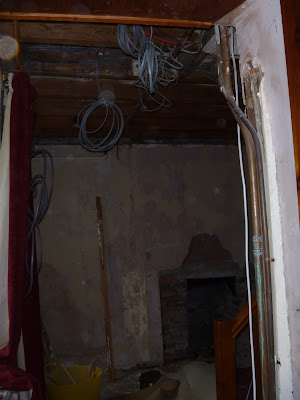 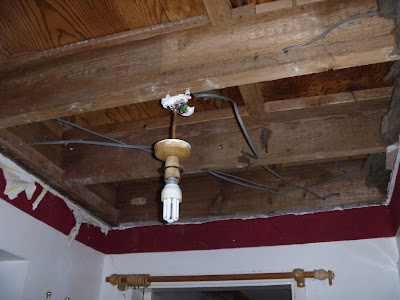 No ceiling in the hallway
Posted by Margot at 09:21