On Wednesday I received an email. Could I attend the Festival of Discovery the next day? I knew about this festival, of course, and I had indicated I was willing to do a half day shift, but I hadn't heard anything more so I had figured I might have been off the hook. And I had been! But a colleague had fallen ill and I was asked to step in. And I knew there would be displays but it seemed I would not be attending any; I would have to be there to field any questions about our degree programmes. The stands were generally tended to by people on research contracts. So I said yes. And then it became a whole day. Oh dear!

I drove up in the morning. It looked a bit dead still! I parked up and walked in. I hadn't bothered to print the map so I just pootled up to a nearby building to see if it was the one we were in. It wasn't! I tried the next one. I found Cara! Close, but no cigar. I went to the only one left and that was the one. I saw the set-ups, got me a BU T-shirt, and tried to figure where I fit in. There were mainly biological demonstrations. There was also something with a sandbox, and with fossils. I got me a coffee and tried to read some of a dissertation I had to mark (the first and second marker disagreed) before the public would come in. Would anyone come in? This was a brand new festival! It seemed to have been cobbled together from the Anglesey Boat Show, a food festival, and the Festival of Science. 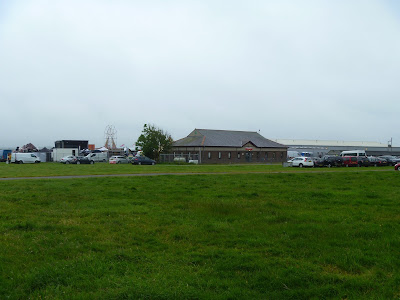 Arriving at the venue, the Mona Show Ground 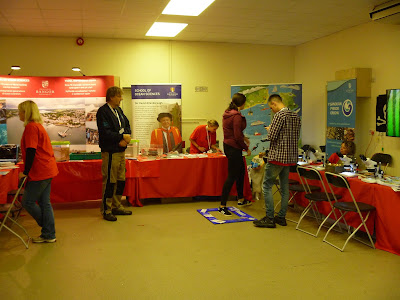 Doing the finishing touches before the public comes in

Then it was ten O'clock and people started to come in. First a trickle. Then a flood! Blimey! I had figured I could just pop around a bit; sometimes I encouraged kids to dig out a dinosaur skeleton (and then cover it up again), sometimes I helped kids setting up a microscope to look for some plankton, sometimes I attended the sand box, sometimes I hung around where a chap called Jamie did taxonomy on some 3D-printed marine creatures (some of which, or the early life stages thereof, could be seen under the microscopes!), sometimes I sneaked some minutes of reading the dissertation in, and I brought our local tech-head who had VR goggles some coffee. 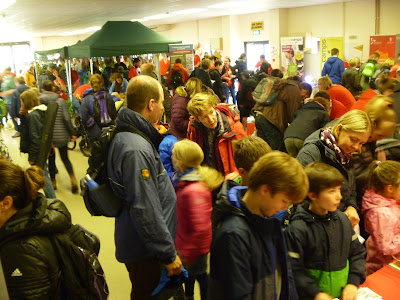 And then the public comes in - in droves!

After a while I did the taxonomy thing myself. I had decided I was not happy with the microscopes as there just was no space to get to them. I don't like crowds! And I wasn't overly good with kids interested in the 3D-printed creatures but I tried. My two triumphs were talking one girl through the taxonomic key in Welsh, and ending up with the identification of a periwinkle! And one tiny boy who was incredibly systematic and insisted on going through the entire key, in order, and identify absolutely everything. Cool!

After a while it was lunchtime and I had a few sandwiches. Then I was wondering if I should go. Nobody wanted to know about university degrees. Everybody was either a primary school-age kid or a parent thereof. And I had done four hours of braving both crowds (which I hate) and children (which I fear). And the organising ladies were fine with that. They were happy I had been willing to step in at such short notice! So I gave the T-shirt back and left. I still had time to go to the office and get some of my normal work done. And I was also back in time to join the ThursdayNighter trip. Bonus!

I think we will be back next year. It was packed! But then I want my own set-up. Or maybe help the microscope people (but I'll have to learn to identify the non-foram, non-dinoflagellate and non-diatom creatures like barnacle larvae and crab larvae and what have you). This way I was a bit a jack of all trades and a master of none. But I think the public had a good time!
Posted by Margot at 11:13