When you drive into Blaenau Ffestiniog, you see a very steep incline apparently going nowhere. It puzzles many people! The trick seems to be that back in the days, there was a wood continuation of the incline, and that lead to the entrance of Nyth y Gigfran mine. That wood has long gone. And there isn't much underground, but the views from the entrances are lovely. So when it was forecast to be a lovely Thursday Night we decided to go there! And what a good idea it was.

We went up the Cwmorthin spoil heaps we walk past so often. I had only been up there once before! And back then the weather had been quite different. I saw the view like I never had. 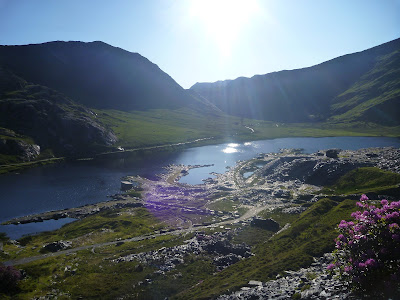 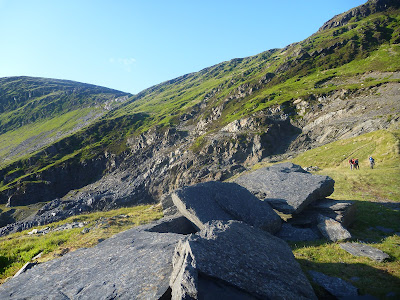 Pondering the way on near the open works

We walked to the crest of the hill and then around. We knew it mattered where we would come out; the side of the hill where the mine is is very steep and if you come out too high or too low you struggle to get to the desired level without falling off. But we got to a drum house. It was not on the incline so it was probably associated with the top of the wood continuation! Time to pack away the sunglasses, and get out the hardhats and lights. There were entrances on and near this level!

I walked to the entrance on the same level, and saw it was a vertical drop. Bad idea! But we had seen a level a few meters higher too. I climbed up to it and had a look. It was wet! And I wasn't wearing wellies. I decided to cal Ed who was. I was resigned to getting wet feet at some point, but right at the beginning when I didn't know if it was worth it and when we had a wellie-clad man available was a bit more commitment than I felt like. Ed made his way up and I went down. The others were dropping a level to a promising-looking ledge and I followed. 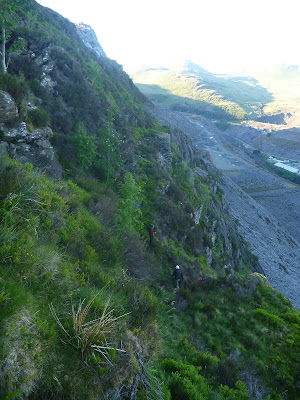 Finding our way along the slope

On the ledge we saw a few more entrances but they were also wet. And from a convenient ledge we saw a fence. We figured that would be the look-out point of the mine tours that had been happening in the eighties. David said he'd have a look. I thought that was a good idea. I left my bag and followed. That was a mistake! As clearly there was a level there (where else would the people come from who would admire the view?) so I should have had my hat and light with me. But David said I could just see by the light of his light. We started like that but he had a torch with him and I borrowed that. We walked all the way to where it came out in daylight on the other side. It opened up into the open quarry. We looked a bit and went back. The quarry is off-limits!

On the way back we checked all side passages. These were not extensive. We also bumped into Jason who was coming the other way. When we came out the others went in too. We went and checked the other levels we had seen. We had rather wet feet by now anyway! And not much to lose. Then we sat down to wait for the others and had a sandwich. We had an amazing view on Blaenau and it was quite pleasant! 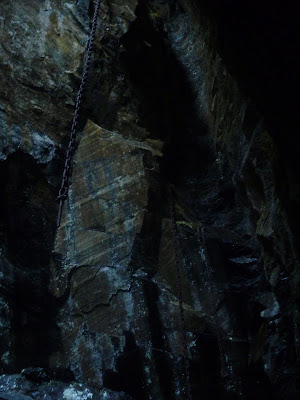 Impressive chains in a chamber in the Oakeley level

After a while the others showed up. Except Jason! Where had he gone to? We waited a bit longer. Just when Ed wanted to go and investigate he appeared. Good! We had a bit more of a chat but the midges were coming out so we set off on the way back. Along the way Jason and Ed did the last levels but they caught up. And we went a different way back. We just walked along the contour lines and ended up at the Cwmorthin spoil heaps. And there is a path that cuts across them, back to the main path! We followed it.

The men had threatened to go get a kebab afterwards. I don't want a kebab. I just want to go home! But this time I had decided to just suffer the kebab so I could share a ride with David. That saves 1.5 hrs driving in a car! That's worth something. All men ordered food; all kebabs except for David who had a pizza. He offered me a slice, and I accepted, which of course resulted in a lot of hooting and whatnot from the men. Another reason I don't like this sort of thing! They make such a show of me either eating things or not eating things. Mind your own business! But then we could go home. And altogether it had been a good trip. I'd been looking at that incline (not actually in the pictures) for years and now I know what it leads to!
Posted by Margot at 08:13