I don't think I'd climbed since October. Term was hard! But it's over now. And my visits there and other visits here are over too. I could climb again! And we would go to Penmaenmawr. It's a nice venue! I've been a few times (like here). Generally we only do tame routes. But the not-so-tame ones there look intimidating! and I knew that this week, Glyn was away, so there would be nobody pushing the boundary. Oh well! I hadn't slept well so was a bit tired and not quite in the mood to push myself to the edge anyway. I was certainly not going to lead one of these!

I met up with the others at parc Menai; we try to limit with how many cars we travel. It was a lovely day! And we walked comfortably through the beautiful landscape to the crag. And we had a look! Tony looked longingly at the 5s and 6s but we settled at the tame end after all. Eifion had suggested two climbs, and other manned them. That left Tony, me and a new bloke called Sion. We needed another route! And started eyeballing potential other routes, not hindered by actual information about them. Tony set off on something that looked OK.

He got a few anchors in and wavered. Where to go? By now he was feeling exposed, and he couldn't see the top of the route. Did he have enough quickdraws? He pootled and equivocated and then came off again. And drew down the rope. He thought that with the rope only in one anchor wasn't safe. Now what? And in the meantime it had also gone from sunny to cloudy and windy. I made sure to put on a jacket! And I figured the difficult routes were off; if Tony was so spooked already nobody would be leading 5cs tonight...

We saw that there was one route in a series of three (or four) was rigged. We could climb up that route and rig the next one from there. And then climb it! So we did. Then some really easy routes were free. We did them too. And stripped them. Then we could do the route we had rigged, and the one next to that. One of them had a difficult start! So there still was some challenge. Apart from staying warm. At least there were no midges in these conditions!

When all was stripped we quickly packed up and left. Back to the warm cars! And I have broken my long spell of non-climbing! 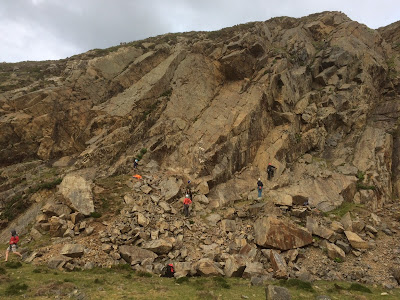 Little puppet people on the crag 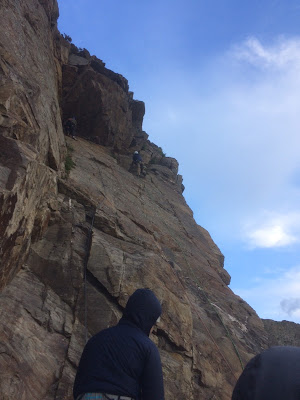 Two people on the row of three or four routes