Continued campaign against the lump full of ferns

When I bought the house, and the garden, I saw all the raised beds and a clump of ferns. I sort of assumed the ferns were in a raised bed too. And raised it was! But not a bed. It was a heap of left-over soil with a plastic sheet over it. And the ferns had grown through the sheet! And I had decided I should get rid of that one day. And that day had come. I started soon after my mother left. But I realised it was one of these issues I needed to chip away at over a longish period of time. So every weekend since I did something!

It tends to involve chopping away at the ferns with blunt violence; they hold on well and if the clump is big you can only deal with it by subdividing it into smaller clumps and then ripping these off. Then you have to comb the soil of the roots under the sheet. Or the other way around! And then you can dump the ferns in the garden waste bin and put the soil in a bucket. I dump it in the raised beds; altogether they represent quite an area so you can dump quite a lot on them. If I have much left after that I can just spread it out over the lawn! That would mean strictly no walking into the bedroom from the garden for a while! But I can do that.

About one thirds of the ferns are now gone. And probably less than half of the soil. And I have separated quite some of the sheet from the soil, but I can only finalise that once the last ferns are gone. Progress is being made! And when it’s done I’ll sow grass seed. And then have a very sophisticated lawn! 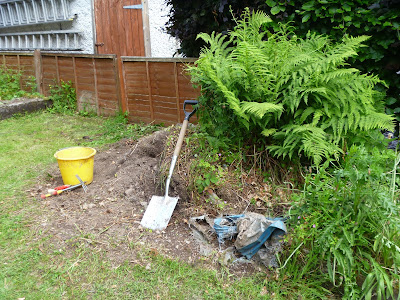 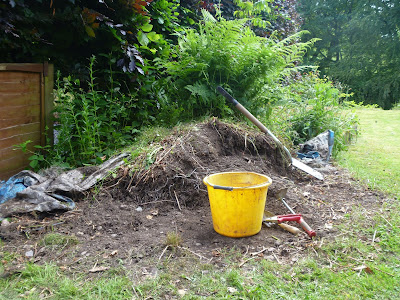