There was a mine somewhere nearby I hadn't been to: Cae Coch Sulphur Mine. Sometimes it got proposed but such suggestions were always shut down; some of us think it's an awful place. And this week we would finally go. And then I was asked to attend the Festival of Discovery! That ended at five. And it's an hour's drive. Oh dear! But I managed to get away early and I could join the Cae Coch trip. We would be there with our annual guest: Neil (the quiet American). He had actually been before! And nobody else of us. But David had printed a description of how to find the entrance just in case.

We gathered and changed. It was a nice night! When we were complete we walked up. We followed a forestry road until we saw an industrial building. We knew that stood at the bottom of the old incline. And we would go up there! But it was warm, and the incline was steep and long. And most of us were wearing caving suits. Oh well! We all have showers at home. 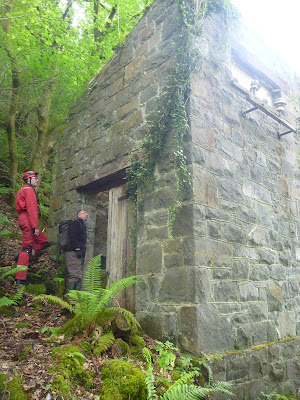 The building at the foot of the incline. Notice the amazing masonry!

We came to the winding house at the top and had a break. It looked like a tramway went off to the side. We had a look there; not even Neil had been there. There were upturned wagons, and dilapidated buildings, and it seemed to end at a stone quarry that was probably used to provide material for mine buildings. We went back and went the other way; that way the mine lay. 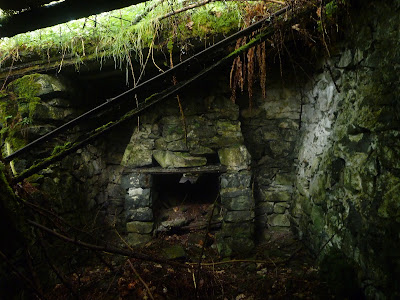 A nice fireplace in one of the dilapidated buildings

We found it and went in. I was with David, Phil and Miles. Where the rest went was unclear. We had a good look around. It was nice! It smelled a bit sulphuric (quelle surprise) and wasn't spectacular but it was fine. The rock was weird and there were interesting snottite waterfalls. I loved them! 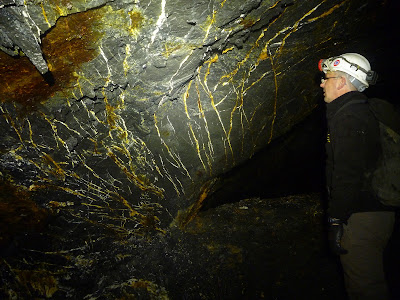 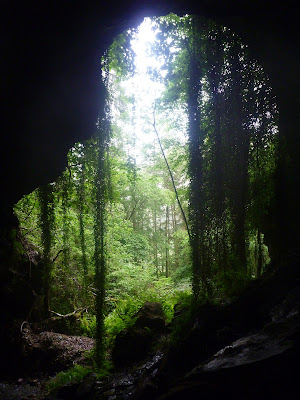 Looking back at the entrance 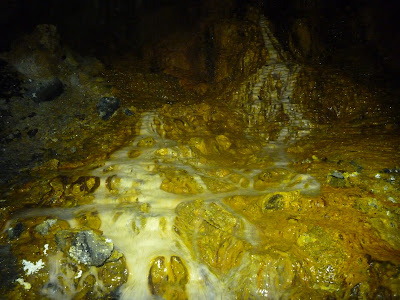 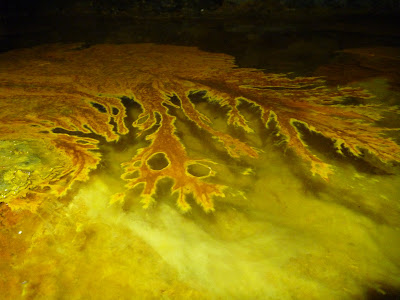 Strange growths on the water 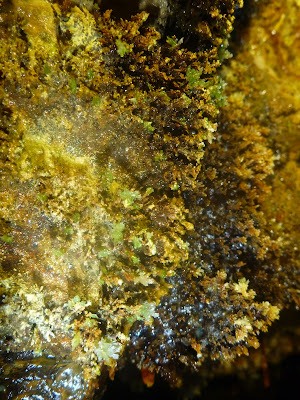 Moss, speleothems, or both?

After a while we decided to go look for the others. We went deeper in. No sign of them for a while! But we did find a substantial snottite river, that drained into an inclined winze. We were intrigued but not keen to follow it; one imagines it would be easy to go down, but rather difficult to slither back up. We then went up, and soon heard voices The others! Except Miles, who seemed to have gone outside. We sat down and had a sarnie. Then we showed the others the inclined winze. David and Phil vanished. I tried to find them but failed. I did find some nice drippies! 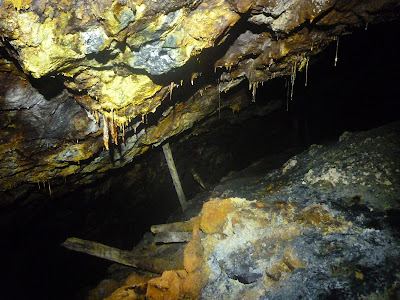 Deeper into the mine 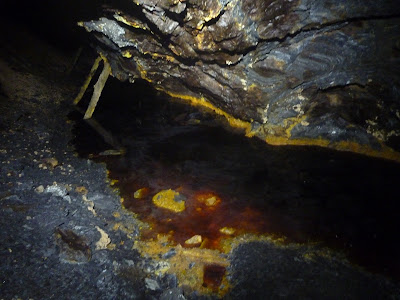 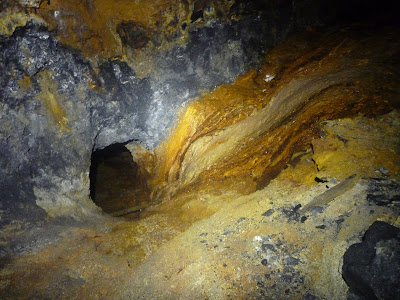 The inclines winze the snottite river drains into 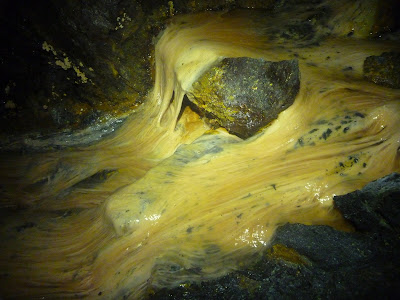 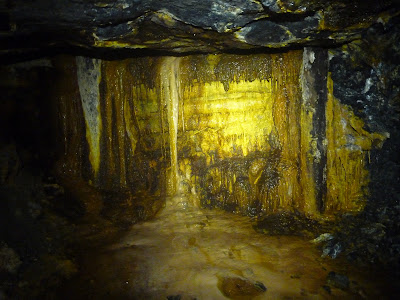 What would be behind the wall (except more snottites?) 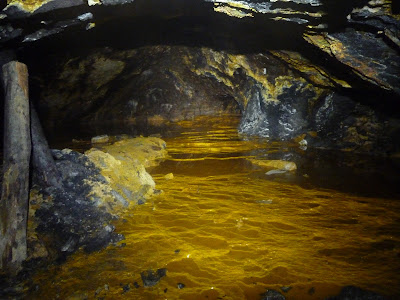 After a while people got cold and we decided to head out. Phil and David would understand! But we weren't out yet when they reappeared. David had left his bag in the lower regions of the mine. As I had hitched a ride with him I figured I needed to keep him close. I joined him retrieving it. Then we went out, to find a light. Miles? No, a torch shining on an improvised message 'I have returned to the car'. I took the torch and we walked on. We avoided the incline this time; we could just make out a sort of a path and followed that. Going down that slippery steep place in the dark would have been, well, interesting! And we got back without issues. And found Miles back. He has a standard call-out time of 11PM and he had to tell someone he was out OK. Blimey some people stick to all the protocol! I tend to just hitchhike along with people like that...

We had all had a good night and decide we had to come back. We can't have seen it all! And I wouldn't mind that at all! I have never seen snottites like that. And it's not even far away!