The previous week we had gone to the Sidings, in Dinorwic, but had rained off the crag after we had pretty much all only climbed one route. So we decided to just try again the week after! The forecast was better.

We walked up and I just rigged the one route I could rig from above immediately. That was one rope up! The easy route was quickly rigged too. And I ended up climbing with Tony, who was feeling brave, so he lead another route. We were being executive!

When I seconded Tony's climb I was glad I hadn't had to lead it. But I climbed several routes (it stayed dry), lead nothing, but make a serious effort. One of the routes was a 6 of some sort! I think a 6+. Not bad for outdoors, as far as I am concerned. My climbing wasn't very elegant but I enjoyed it. 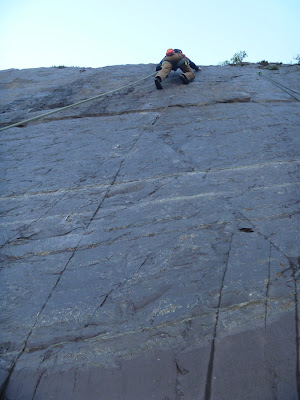 Ika at the top of a route

It had been a sunny day, so upon arriving at the bus stop I had changed into my leggings. Too warm for black jeans! But the sidings were in the shadow, and the wind was strong and cold, and after belaying Tony up his route I was ready for a jacket. And after belaying him again I added trousers, a buff, and a down jacket. That was better! We were pretty much all wearing that sort of attire. It really was cold! Difficult routes keep you warm, though.

It was a good night climbing! But we figured we should pick a crag that's sunny at that time of day for next time...
Posted by Margot at 08:24