Academic exodus - but with hope

There is a sort of myth that once you work at the School of Ocean Sciences, you never leave. Maybe you leave for a while, only to come back, but nobody leaves for good. Except those who retire, of course. But James broke that myth. And he seems to have set something off.

The next person to leave was Kate. She saw another opportunity elsewhere and decided to leave the sinking ship. I took over her job as peer guide coordinator. Then Cara left, without even having a job to go to. I didn't have much to do with her but she is very nice. And now she's gone! We had a small leaving do for her. 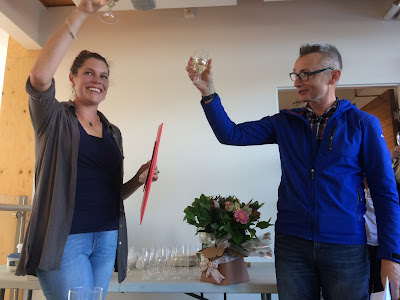 Dei raises a toast to Cara

Two more have revealed they will leave; my office neighbour Andy, who is a marine biologist and a man heavily involved in recruitment and such, and Coleen, who has been a running mate and who since very recently has been married to Andy. They will seek their fortune abroad. That's five people leaving voluntarily! And I am replacing James but only for one more term; I don't think Cara and Kate have been replaced, and there are three professors about to retire and I suppose the policy is still to not replace people. But at this level of loss things would become unsustainable. There is already a bit of panic; who will do the jobs of all these people who leave?

On the Teaching Conference (write-up to follow) we had a small meeting with those who do teaching and no research. It was a bit of a sorry meeting in a way; it dealt with the future, but whose? Present were the Head of School; Dei, the teaching coordinator (I suppose this position has a better title but this describes things sufficiently), and all the available Teaching and Scholarship staff. One was not there due to maternity leave. That left Sarah (all good), Coleen (with two terms to go) and me (with one term to go). Strange bunch for a meeting on the future. But David, the Head of School, said he had indeed been given green light for hiring some people and would be advertising jobs in January or so. That's good news! And I am sure most of these jobs would be for biologists but one can hope...