Family history on both sides

Years ago my dad wrote a document about how our surname came to the Netherlands. And that involved family history, of course. There are only few leaves on the Dutch branch of the family tree and my dad is the oldest, so he is in a good position to document such knowledge (it was his dad who had come tot he Netherlands) before it is lost. But one thing lead to another and before you know it, he had greatly extended the text, one of my cousins had dug out illustrations from who knows what archives, and my uncles had also pitched in. And the whole had become a book! Very interesting. For descendants like me. I had intended to blog about it at the time but it must have been a busy time and I never got around to it. 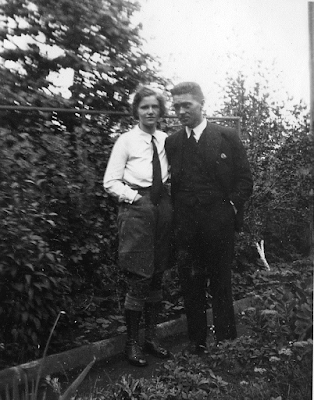 Then a distant cousin on my mother's side, whom I had never heard of, had a book published that was half novel (with imaginary protagonist) and half family history on my mother's side. He had gone back a long time! All the way back to the 17th century.

My mother had seen the book and she knew the cousin. And she was not unreservedly positive! She had some not-necessarily-positive memories of that branch of the family, and she also had spotted inaccuracies. But I was intrigued anyway. I know very little of the family history on that side! And what happens with distant ancestors in, say, 1689 is of only tangential interest, but this also deals with my maternal grandfather who I never knew. And it had pictures! Of my granddad and great-grandparents (among many other things, of course). And the book mentioned events my mother was still grateful for; my granddad and his siblings had become orphans quite young, and a relatively well-off other branch of the family had stepped in to give that batch of kids a future. They did things such as pay for education, or buying small businesses for the youngsters so they could fend for themselves. And that is indeed a beautiful act! 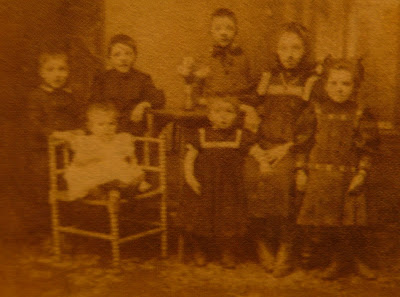 My maternal grandfather and his siblings (I don't know which one he is!) as children

When I visited my mum she had the book lying there. I read it in a jiffy! And then she let me take it home. One of my sisters is interested too and she'll be visiting anyway. So then she can have a look too! I think it's cool to have both books. One is but a small episode in a long, long story. And now I know a bit more of what happened before!
Posted by Margot at 09:17