When I had a cup of tea with Phil after my already rather full day with our morning in the mine and the early afternoon walking around, he suggested we go climbing the next day. That sounded good! One has to seize opportunities when they present themselves. So the next day I biked to his place, re-packed my kit into a backpack, had a cup a tea with him (to great appreciation of the dog) and then we were off.


We went to Bwlch Sychnant, where I had been twice before; once just on a walk and a next time for climbing purposes. This time, the mountain was on fire. An impressive sight! But the fire was not where we were heading, and the wind blew the other way, so it didn't affect us. We got to the wall and kitted up. Phil was quite happy for me to do the first climb. I started easy and was up in no time! I left the rope in and Phil climbed it on top rope. I thought he'd be bored but he hadn't climbed for almost six months; he was a bit rusty in his moves! 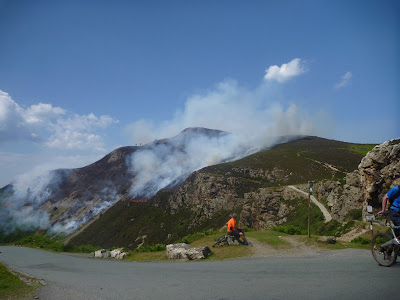 How we found the pass

We kept going that way. I had started on the left-most climb of a series of four, which got progressively harder to the right. I lead the next one, and Phil followed. Then I lead the third. After that I wanted a break! I felt like a cup of tea and I wanted to get out of my climbing shoes for a bit; it was a very hot day and then your feet are bigger.

We then went back for the third route. Phil gave it a go but gave up. We then still had a karabiner in the top, as the first route had only anchors in the top, and no rings or maillons or anything to lower yourself off without damaging the rope. I now had to get it back! I climbed the easiest route, got the karabiner back, traversed to the second pitch, and had Phil lower me from there. Done! Time to get out of these shoes, now for the rest of the day. 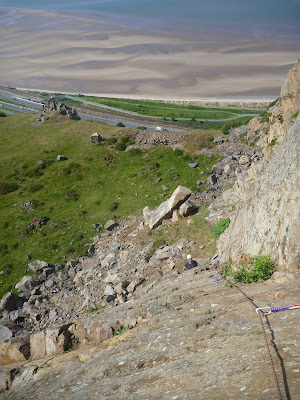 View
View from the top

We packed up, admired some other climbers on more difficult routes, and walked back. The fire was still raging! A fire engine was even coming up the path. That was quite a feat; some nutcase had parked his car slap bang in front of the path but they had managed to squeeze past. It looked even more spectacular! And not too bad; heather landscapes just burn from time to time. It's all part of the game. We proceeded to get an ice cream to cool down and then we went back. It had been a very busy weekend, and it wasn't over yet! It had been good; if you are with just two there is a lovely climbing over faffing ratio. Since I have my own kit I can do things like this. And this time it worked well with one keen to lead and one keen to avoid just that! 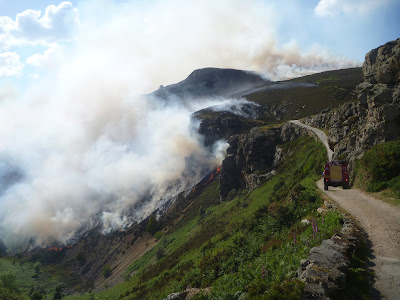 The fire engine that had managed to get onto the path
Posted by Margot at 08:59