More work on the stoves

Work on the fireplaces was one of the first things to happen! But after the initial activity, not much happened for a while. Then on the Friday my parents arrived I noticed a change had been made. The fireplace in the landing had a fireplace sill (if that's the word). Cool! That was new. The thing had been standing next to the front door for weeks. But now it was there in all its glory! 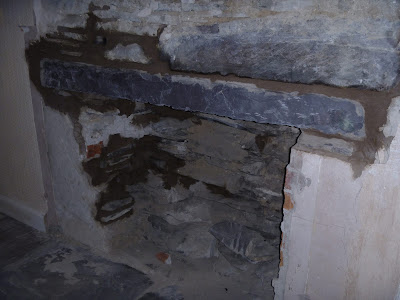 A week later the guys would make an appearance again, but it took me a while to notice the signs. This time they had been working on the other fireplace; that was made of brick, but some breeze blocks had been used, for some reason. These are ugly! And now they were gone, and bricks had been put it their place. Great! There's progress!

The next job will be to find a hearth for the living room. It's compulsory! And I would like a rough piece of slate. But once that's sorted it should go fairly fast! I'm confident I'll have stoves before the winter hits!
Posted by Margot at 07:54