Bring your sewing machine to a seaside resort

When the university closed for Easter I knew I would finally have time for all sorts of things. I went to the recycling centre to chuck away my old radiators, I put one good radiator on Freecycle, I had a coffee in the garden, I went to buy some groceries and turned them into what passes for a dal (dahl?) in my kitchen (that's more complicated cooking than I normally do!), did loads more of such chores, and phoned a sewing machine repair place. I had already found out mine was faulty previous summer, but only now had I felt the rest to actually try to do something about it. It would be good to have it, to sort out my curtain situation! And I had googled if there were people around that could repair these things, and to my surprise there were. One near Llandudno and one in Cemaes. And Llandudno is closer! And when I phoned the place, the lady who answered suggested I bring it in right away. Eh, OK! Why not! It's Easter. I got into the car and drove east.

I got to Rhos-on-Sea (my navigation skills were impeccable), parked up, and walked into the shop and was immediately recognised from the machine in my hand. I handed it over to the engineer (he looked like he did this to supplement his pension) and was advised to let him have a look and come back in half an hour. Well, I can do that! I wandered towards the sea and figured I'd find a cafe or something there. And I did! An ice cream parlour, to be precise. It was a bit difficult to buy a cone (I ordered a cone with two scoops, but initially got a cone with one scoop for the price of two cones with one scoop each, and when I managed to communicate I wanted a cone with two scoops they wanted to charge me for two of these; I don't think I ever struggled so much buying some ice cream!) but I managed and sat down with my book. It's holiday! And I am eating black current ice cream at the seaside. And I wasn't feeling frustrated or impatient or any of that. Excellent!

When I got back the situation wasn't very clear. I would have to leave my sewing machine there for a week to let the (clearly part-time) engineer figure out exactly what was wrong with it. I hope he can fix it! It's a good machine when it allows me to make the decisions. And it could help me with dresses and curtains and whatnot for years to come! 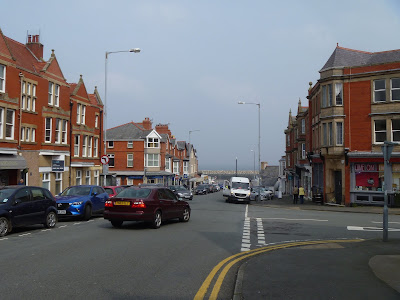 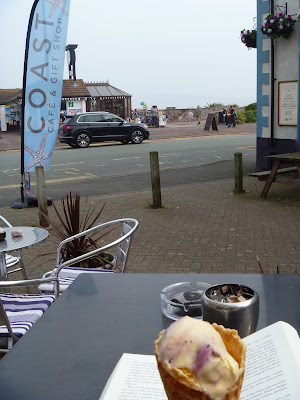 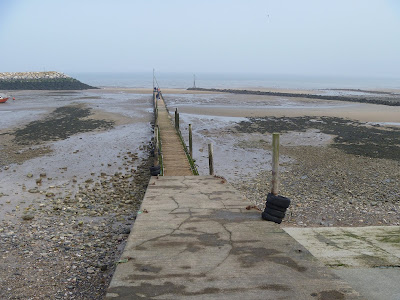