The knotweed looked lovely again this year! That clearly meant my (and my stepmother's) attempts last year hadn't quite worked. But it seems you can't get rid of the stuff in one year anyway, so I wanted to just do another round this year and see how things got on. So on a sunny Saturday I filled my evil poison injector again, and headed for the riverbank.

It's not a particularly pleasant job but it's fairly quick. And when I was at it, I tackled some Himalayan Balsam too as it's rampant and it's trying to colonise the garden and I don't want that. And then there are brambles and nettles, which don't make any to this any more comfortable. I came out after the first run (had to stop as my device was empty) with tousled hair (the brambles had grabbed it) with knotweed flowers in it. And some very mild hope. Would this do the job?

After a refill (both the device and me; I myself had some coffee) I went back. I did a whole bunch more. But then before I was done I checked the thing was still working (I regularly do that) and it wasn't. It wasn't pumping anymore! The liquid in the little tube wouldn't move if you pressed the lever. Why is that? It had to be something mechanical but I saw nothing obviously wrong. Oh dear! I'd have to either find out what the problem was, get another one (should be avoided) or give up altogether. I wasn't overly hopeful I'd sort this anyway!

If I can't do this myself I will have to get in professional help. I don't think I can make the council, or Natural Resources Wales, sort this out. And maybe I will indeed go commercial. The weed is not doing any actual harm, but as long as it would be scaring mortgage lenders it's worth getting rid of it. Whoever does it! 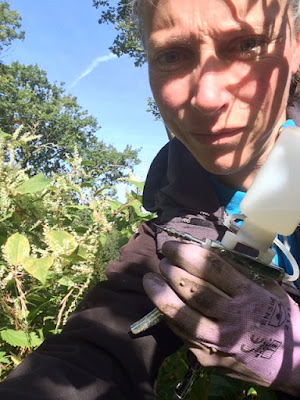