Recce-ing for the new fieldwork

Anglesey is internationally recognised for its fascinating geology. And we, as the school of Ocean Sciences, are based on Anglesey. So why are we not making more of it? We decided we should. So this autumn we will run a new fieldwork module for the 1st years. But that also means we should get organised quickly! So with those on the cards to teach this module, and here some guests, we would use three days to have a recce.

The first day we had the four instructors: Dei, Jaco, Suzie and me. And a guy called Garry who had, I think, been a geology lecturer but had now moved to an administrative role. And two work experience students from nearby secondary schools.

We went to Lligwy beach, as Devonian Old Red Sandstone is exposed there. Garry knew a lot about it. It was great! Then we went to Llanbadrig, near the church, as there should be Precambrian melange exposed there. Melange is basically lots of different lithologies in random order; you get them in subduction zones. All sorts of things get sucked into the oceanic trench, and not necessarily in order. Bits just fall down! Or get squeezed out. And the melange indeed was there, but it wasn't very easy to see. We then tried to find stromatolites in a nearby limestone quarry. The limestone was one of the random blobs of lithology that had ended up in the trench. We didn't find them. So we think we'll skip Llanbadrig, but we'll certainly go to Lligwy Beach. 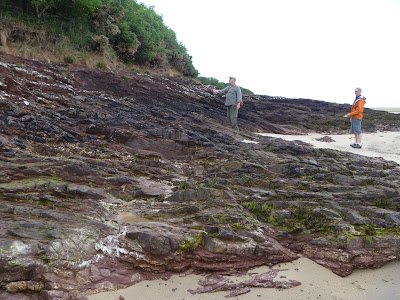 Garry and Dei admiring the ORS 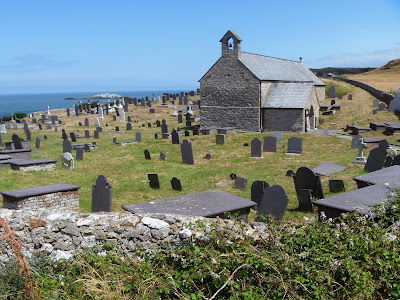 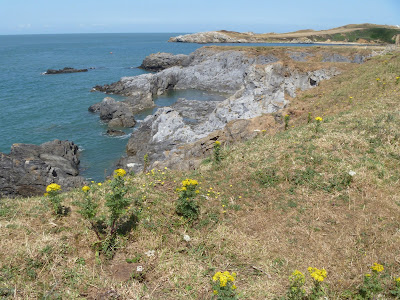 The quarry from a distance

The next day we went to Porthwen; that had melange too. (In addition to a nice brickworks). This time we didn't have Garry, or Suzie, but we did have our old dean Colin. He is a treasure trove of knowledge too! When we walked up we saw the white blobs sticking out of the otherwise flattish landscape. The flat bits were schist; the blobs would mostly be quartzite, as it's very hard, but there was a rumour of marble blobs too. We bushwhacked like there was no tomorrow but we didn't find the marble.

Then we walked on to where you could see Ordovician conglomerates lying unconformably on the quartzite. You're likely to find that really cool if you're a geo-nerd! Porthwen it will be, for the Precambrian. We then tagged on a trip to Rhosneigr, for Precambrian granite, and some more Ordovician clastics. We had to wrestle our way past horses and Hornfels, but we got our granites! The oldest in situ rocks on Anglesey. The granite doesn't come from the trench. 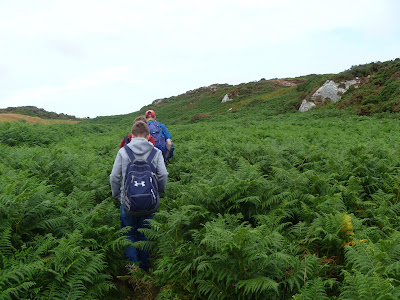 Some bushwhacking while looking for nice outcrops 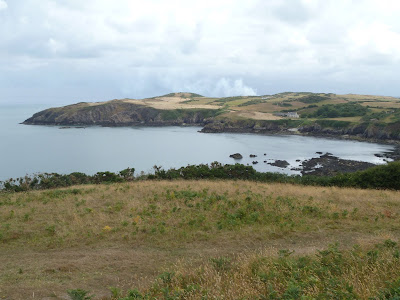 Amlwch, and a grass fire, in the distance 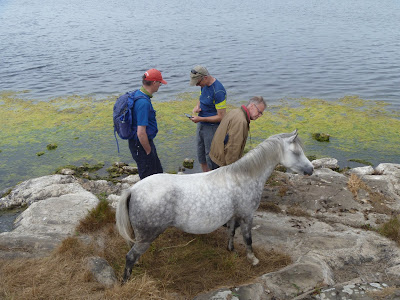 Colin is slightly confused by a horse. Dei checks the BGS app. 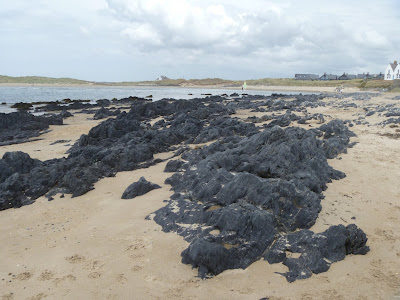 Black mudstones on Rhosneigr beach; click for big version so you can see the sandstone layers.

The last day it was only me, Dei and the schoolboys. The latter were from Welsh schools so we did the entire day in Welsh! That was cool. We went to Llanddwyn Island. I'd been there soon after coming to Wales, and then several times later too. It's very pretty, and has again lots of Precambrian stuff. This time we had pillow lavas! 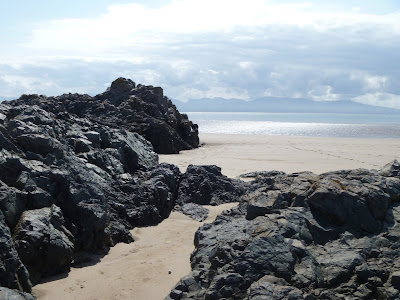 Pillow lavas near Llandwyn. Points for who can spot Dei. 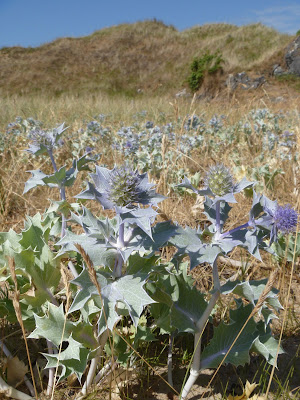 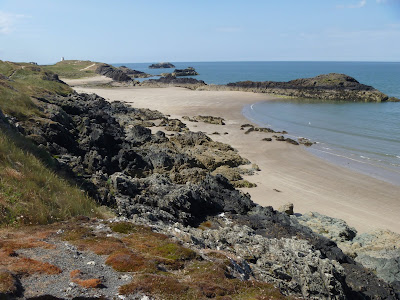 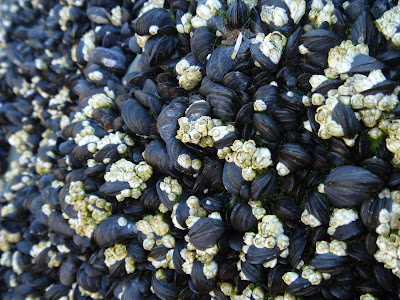 We saw great rocks again; this time with dykes cutting through. We had lunch on the tip of the peninsula. Which was unfortunate for me, as I had left my lunch in our vehicle! The previous days we had always eaten near the car. But Llanddwyn is different. Luckily, Dei was willing to share his lunch with me!

After Llanddwyn we tried to find some nearby late Carboniferous, but we didn't find them spectacular enough for the fieldtrip. Then we looked at the blueschist the Marquess of Anglesey stands on. And then we went back!

We will have to do more recces. We now have the Precambrian and the Devonian covered, but what about the Cambrian and Carboniferous? But it's clear this module could get rather marvellous!