Back to the coastal path

My time on Anglesey is coming to an end! I figured that I should continue with my coastal runs now I still live close by.  I looked at the map to see where I had ended last time but wasn't quite sure. I decided to drive to a lay-by somewhere between Porthllechog and Cemaes and start from there.

When driving through Porthllechog I saw two lifters. I took them in! It turned out to be a Spanish archaeologist (I think she was Spanish, anyway, base don her accent) and what might have been her boyfriend. They were headed for Holyhead but they were happy for me to drop them off in Cemaes. I said goodbye and turned back.

I parked up and started running. Soon I realised I had done that bit before! Oh dear. That's what you get when you don't prepare properly. And maybe these Cemaes hitchhikers had been a hint from God! Trying to tell me to not start that far back. But it was a lovely day; why not keep going.

As it had been dry recently I was on my road shows. Bad idea! I slithered all over the place. But what a place it was. And before I knew it I saw the place where I had turned around the previous time. Now I went on! I passed a funny structure on a headland, and then came to an old brickwork (not the prominent one a bit further back) where a small group of walkers was having a break. They also had an old dog! Which wanted cuddles. I am quite easy to convince to provide these.

At the brickworks I could have gone back tot he road but I decided to go on. Seemed to make more sense! I decided to run to a good place to get back to the road, which turned out to be Llanbadrig, and then run back along the road. That way I would get some actual running done!

I was a bit sluggish running back; maybe that had something to do with food. It was 13:15 when I hit the road! I hadn't had lunch yet. But it was a nice run on a tiny road. I only encountered one car! And at least I now have a very recognisable starting point for next time. Llanbadrig even has a parking lot! 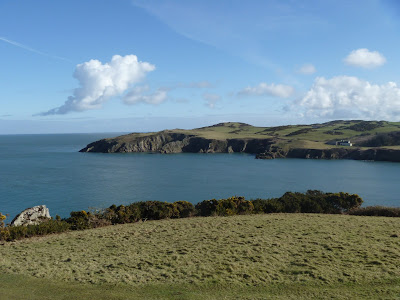 Done this bit before! 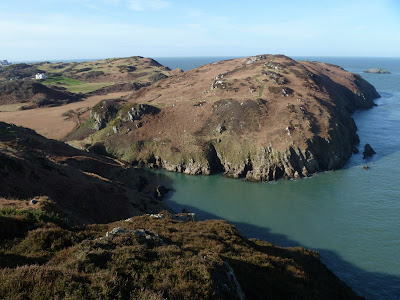 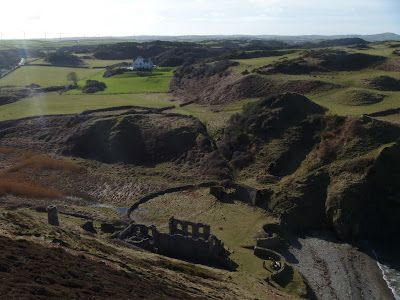 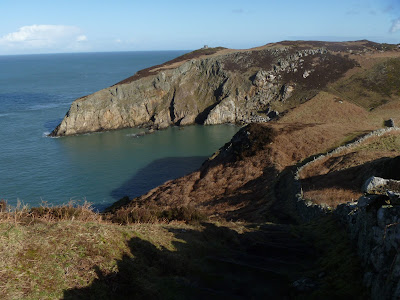 The small tower on the other headland
Posted by Margot at 07:41