When my dad was visiting I had tried to saw off a superfluous beam in my landing. It was awful work and I didn't finish. it. I didn't even get halfway! But then I decided that the situation asked for a wire saw. I ordered one! Which didn't come. I contacted the seller and another one was sent. And I tied it on a Friday late afternoon, before Phil would pop by to reclaim his steamer again (it's been going to and from several times). It didn't work! The wire jammed immediately. Oh dear. But then Phil appeared. He asked if he could have a go. And I had been trying to saw as close to the wall as I could, as I wanted to leave a minimum of stump sticking out. But Phil said the beam wouldn't be particularly strongly fixed to the wall, and it could just be cut in the middle and be pulled out. That made things easier! And he did the honours. Great! In no time the beam was out. 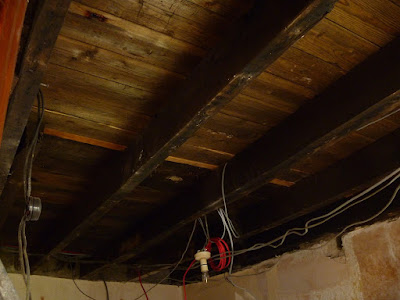 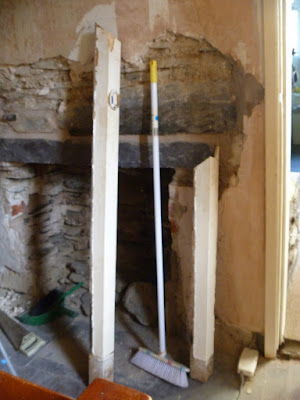 In the meantime, the plasterer came to have a look. He was quite happy with what I wanted done, but he wanted 3-4 weeks of notice. Oh dear! I hope to have a room done before the winter. Best move on with the landing, get the stove sorted, and send the plasterer in. And then the painter (or do it myself). Then I finally have a room finished!