I mentioned before the mine we have our dig in is used commercially; Go Below offers guided adventure trips in there. And these are so popular they started to suffer from overcrowding, It was time to add a new route! Miles and his men had been working on it for months. It's a lot of work; for instance, sometimes they have to make a new traverse along a chamber wall. That means drilling a hole as far out as they can, putting in a bolt with hanger and maillon, attaching themselves to it, drilling the next hole as far sideways as they can reach, etc etc until they've reached the other way. I suppose putting in a zip line is a lot of work too. But they were as good as ready and the route was about to open. Miles had offered to take us to try it out. It would be foolish to decline! This sort of thing is lots of work and it's an honour too. So we went!

We met at the Go Below kit store as zip lines are best negotiated with a tandem pulley, and many of us (including me) didn't have one. Go Below customers get a harness with one standard attached. And long cowstails! I am always a bit hesitant about cowstails as my arms are short and if i would fall off a traverse and be caught by my cowstails on the hand line, I wouldn't be able to reach it. But I chose a full Go Below harness with all the stuff anyway. Later I would realise that was a great idea!

We got kitted up. As getting people past bottle necks like zip lines can lead to some waiting I was wearing my warm furry suit. It did mean I did not look forward to the walk up! Way too warm. But Miles offered as many as would fit in his car a lift. I was the only one who accepted the offer. At the entrance we waited for the others. The we went in. We went down a manhole and a staircase, and that lead us to the first new zip line. Miles gave us some instructions on how best to attach one to it and then we were off. It was great fun! On the other side Miles mentioned there were two ways on: a zip line and, in his words, a terrifying traverse. Most of us went terrifying! It wasn't so bad. I was happy with the long cowstails though; I should have known that Go Below hand lines are rather high, and that my own cowstails don't reach them. 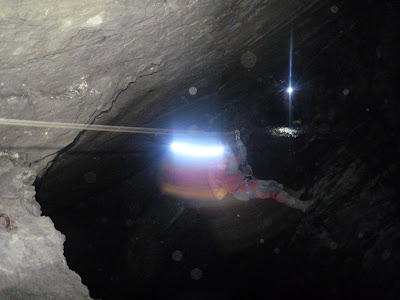 David on the first zip line 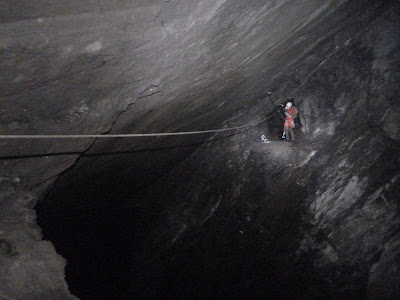 The way on was up some brand new steps, and then down another manhole, and then down more steps (new ones) and another traverse. We also went over a bridge that still had the original beams but which had been recently re-decked. We also went down a slab; Miles had said we didn't need descenders for it as you could hand-over-hand it. When he got to it he said 'this is not how I remembered it' and we started to organise our descenders. I borrowed one from Edwyn. I had believed Miles! 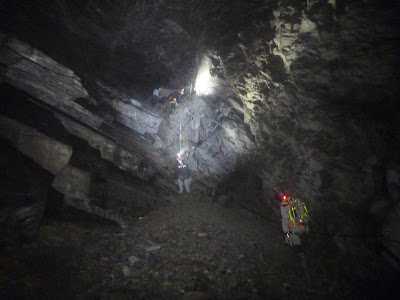 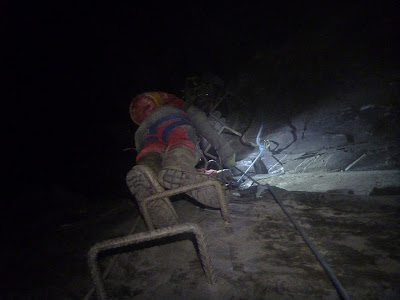 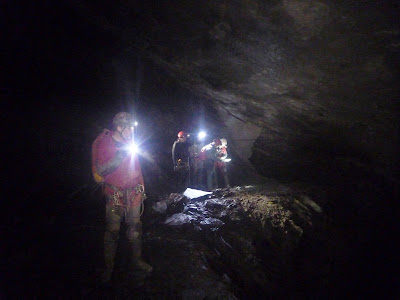 Looking on the map; where are we now? 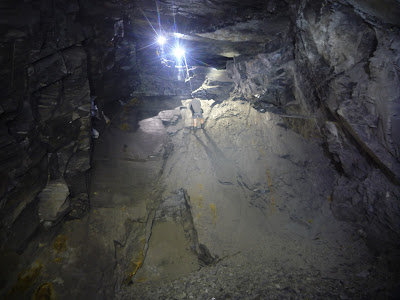 Miles comes down the slab

When we were all down we had a cuppa and a sandwich. From there we could go all sorts of ways back. Edwyn picked one. We got to the corkscrew and I thought actually, going up it and then go out via part of one of the existent routes would be nice! More zipping! So we went for it. Miles did not have time for such frivolities and he said goodbye to us. He would take an efficient way out. He told us to leave our borrowed harnesses and pulleys near the entrance; he would pick them up the next day. So we scrambled up and across, crossed another bridge (or rather, a beam; no decking here) and found a few more zip lines. Fun! And then we proceeded to the exit. 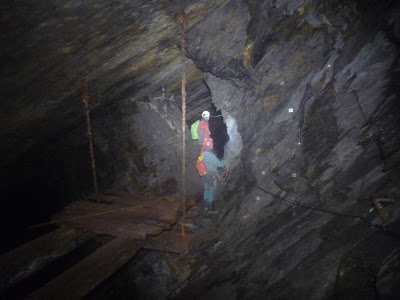 I think lots of tourists will have a whale of a time on that route! And I am glad we got to see it first. In June it opens to the public!
Posted by Margot at 09:18