I had hoped to do lots of things on the house after coming back from the Netherlands! But it didn't go as planned, as I had foolishly not counted on my standard Christmas illness that impeded me quite a lot. But I got some things done.

As the living room and landing had been building sites from early on, they had accumulated layers of dust and dirt, and piles of tools and screws and bits and bobs like that. But now I had plastered walls and ceilings, and a working stove, I had started to use the landing as an improvised living room. So it needed to be made to look better! And as the painter wasn't supposed to make a big mess, I could now clean the floor, finally knowing it wouldn't immediately afterwards be mucked up again by tradespeople. Or myself.

I started by giving the room a lampshade. That already helps making it more homely! Then I emptied out the cupboard, and cleaned it. I also tidied up the window sills of the landing and living room. And I installed some netting! I didn't want to put up proper curtains yet, as I would have to take them down again when the painter would arrive. Netting doesn't stop much but it's something.

I also scrubbed the floor; it still had lots of plaster-related stuff on. And I oiled it with the same oil as the ceiling had enjoyed. And that made all the difference! And there is still a lot to do: I want to take all wall-mounted things (within reason) down in the bathroom before the painter comes. And strip the wallpaper. And strip wallpaper in hallway and bedroom too. And fill holes! And make a cupboard. But I have done at least something and I have to be satisfied with that. Health comes first. But the difference is noticable already! 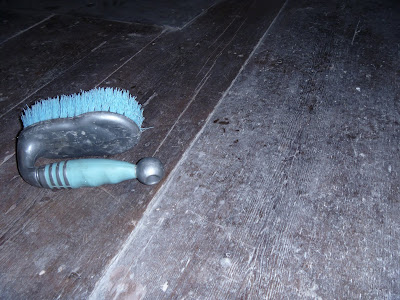 Scrubbed vs not yet scrubbed 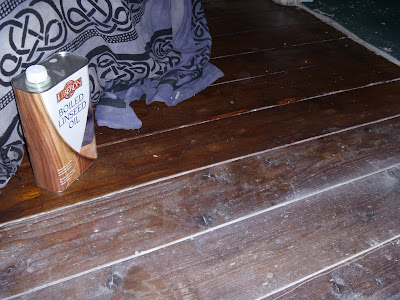 Oiled vs not yet oiled
Posted by Margot at 08:25