My ceiling had looked quite logical. It was a plasterboard ceiling with two beams underneath it running across. That is; one beam, and one thing that pretended to be a beam. The pretend beam held a gas pipe. The real beam seemed to have something to do with providing support for the staircase.

I wandered if I should just try to cut off the plasterboard and wallpaper straight, and plonk a little decorative wood moulding over it. But it's not easy to do that. You can't really get to it very well! And when I went and had a try, I ended up taking out the entire plasterboard. And I think I'll proceed that way. I may well just add wood moulding afterwards anyway! It looks a bit odd; a varnished beam, then some 1.5 cm, and then a Victorian beam. But we'll see! It's still a bit of a work to remove all of it! And I will have to try to saw off the nails. I won't have to be bored anytime soon! 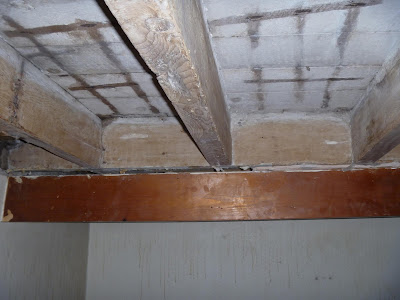 On the left the gap is cleared; on the right, plasterboard and wallpaper remains
Posted by Margot at 06:48