In the middle of hectic teaching I got an email from Lionel that the PCG would be in town again! That's always nice. And I figured I would probably need a break by the time they arrived.

On Wednesday Lionel already phoned me. He was already there! Blimey. I was still working! He said he would spend the next day in the mountains. A good choice! The forecast was lovely.

On Friday I texted him. What about meeting up for dinner? He said yes, and suggested the Pint and Pizza place (officially known as Gallt y Glyn) in Llanberis. I had met him and Rick there too the previous time I had met him! So I phoned the place; they were busy until 8.30. Oh dear. But it was half term in England and North Wales was likely rather busy. So every other place would probably be as busy! I booked it. We could just have a drink while waiting for our table.

I got there shortly after 7. Lionel had said the PCG folk would be there about 6:30. But no sign of them! I phoned him and found out there had been some confusion; Lionel thought we had the table until 8:30, not from 8:30. But they would come my way. Oh well. I managed to use my time usefully. And after a while a bloke came up to me, asking if I was Margot; I was! It turned out he was part of the party but travelling independently. His name was Dave. I had been warned against the overabundance of Daves; the PCG delegation would be three guys called Dave, and Lionel, and one lady called Fran I hadn't met before. So now I had met the 'new' Dave. We chatted until the others arrived.

It was good to see Lionel and the other Daves! It always is. And it was nice to meet Fran. We caught up and had pizza. Then I was tired and wanted to go to bed! We had decided on a venue for the next day. A mine I liked and the others had never visited!

The next day I got ready and set off. Then I turned my car around as I realised I had forgot my boots. I fetched them and was still the first one to get to the meeting point. Typical! But I should have known. Dave isn't known as 'the late Mr Warne' for nothing. But after a while we were all there. More than I expected! When Dave arrived, good old Richard appeared from his car. That was a surprise! But Dave wasn't feeling too well. Oh dear that happens more often. He decided not to go. I didn't think he'd like the walk to the entrance.

With the group of six we walked up. The walking speeds varied a bit! But in the end we all got there. And got kitted. And went in. And then we just explored. We didn't really have a plan; we just checked out all passages. We spent a long time on the floor you come in on! A lot to see. We didn't see the beautiful wheelbarrow we Thursdaynighters had found the previous time we had been there. The PCG didn't like the ascent!

When we were about done there I suggested we do the top floor first and the bottom floor last; it has impressive woodwork. And the others agreed! We lost one Dave along the way for a while, but found him back. And I found 'the ladder of God' again! I had seen it before but hadn't had my camera on me. Or maybe not enough light. I like how it seems to just dangle in mid-air without being attached to anything. Must be held up by divine powers! 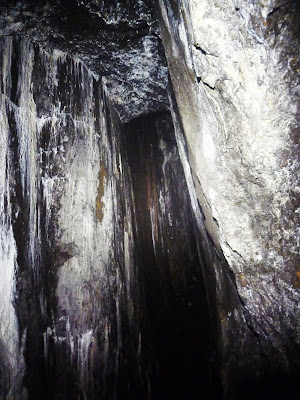 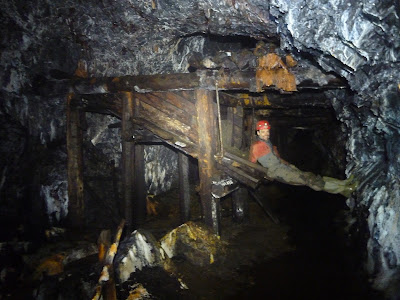 Richard on a pretty ore chute

The others were impressed by the woodwork on the ground floor. But when they had seen it they were keen to get out. Big Dave would be bored by now. And both Richard and Lionel had left their lunch in Dave's car! Oh dear. So we went out. And ate some lunch! While waiting for the slowest Dave. But before he appeared, Richard and Lionel went off to have a look at some surface archaeology. After a while they phoned; it was really worth it! So we all stumbled up the hill again, lumbering through the brambles. And it was indeed worth it! Lots of big walls, one above the other, holding back settling ponds (presumably). 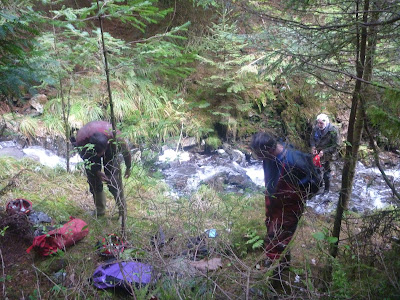 Changing and washing at the stream 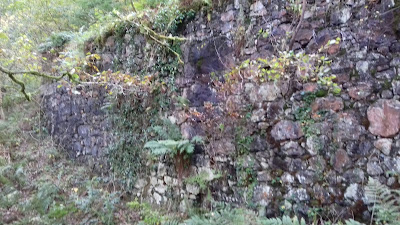 One of the walls in the woods

In the end we went down again. And again waited for the slowest Dave. And then went for a cup of tea in Cafe Siabod. And then we said goodbye. I wouldn't meet up with them the next day; my to do list was a kilometer long. And I also needed my sleep to be ready for another tough day at work. But they will be back!
Posted by Margot at 06:50