Thursdaynighters two weeks in a row!

Originally, everyone would be in Cwm. The Thursdaynighters would do SRT training on some convenient pitch, and perhaps pop by in the digs while they were around anyway. But then Ed, who wanted the SRT training, and Miles, who again had something else on that evening, dropped out. We decided to go somewhere entirely different!

We gathered, changed and walked up. Edwyn had a snazzy plan for a through trip but we got distracted. We headed for a dead-end winze that contained a rather snazzy wheelbarrow. When we got to it, Edwyn scampered up with a rope tied around his waist. It's an Edwyn kind of thing to do! We followed only after he'd rigged said rope. It was a slightly iffy winze. David was first up to photograph the thing, and I came next. Jason and Chris decided that even with a rope they didn't like it. Paul and Jay were somewhere else. 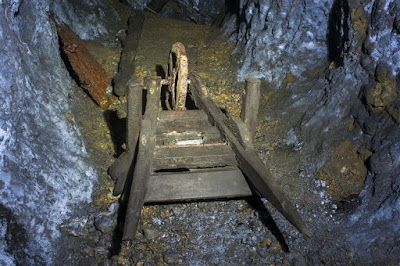 When we were done with the wheelbarrow we did a bit more scampering around; I had a look at a bit I had never seen before. Nice! We also accidentally found Paul and Jay back. Then it was time to head out! Without Edwyn's funny round trip adventure. I was glad it wasn't awfully late. Digging is exciting, but it's also nice to hang around with the Thursdaynighters!