Then I saw an announcement of Facebook: the co-op was looking for volunteers to help do up the store. And it had a picture; I figured it was actually half the ironmonger’s store! It was sort of next door. Now it made sense. And that ironware shop, I had found out, was run by one of our former PhD students and her partner. Cool!

I’m not sure what the precise idea is of a food co-op is but it sounds like the sort of organic, local, socialist sort of thing I like. I suppose regional farmers sell their produce there. Better than shopping in the Tesco down the road where the vegetables are plastic-covered Dutch greenhouse products! So when I saw the announcement I decided to go and lend a hand.

I walked in around noon (I had wanted to do a morning run first, but as I hadn’t had dinner the night before I didn’t want to run before breakfast) and said hello. I saw Jenny’s daughter there! And lots of strangers. They were hard at work. And after some deliberation it was decided my task would be to sand down and re-paint the back door. But I would have a sub-task; I only lived two minutes away so every time someone needed a specific tool I just went home and got it. I brought my sanding machine, and a saw, and pliers, and a hammer. I felt useful! 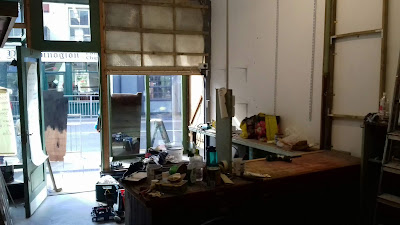 I then sanded the door down, wiped the dust off, applied masking tape and got painting. In the meantime the others were painting and sanding other things, and removing shelves (makes the painting easier), and making a big blackboard for announcements. 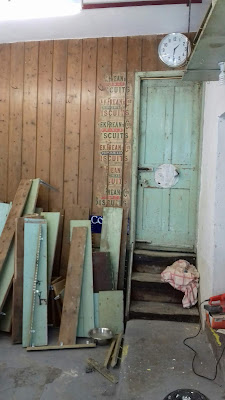 The back door gave access to a lady’s apartment. That complicated things a bit! The door was on top of some steps, and in order to sand something you need to be able to apply good pressure. Standing on tiptoe on a narrow step won’t do! And the very top I wouldn’t be able to reach at all. So I had to stand on a ladder leaning against the door. But it opened out. I didn’t want to lock the lady in but I had to bolt it to make sure she wouldn’t open it and have me tumble headfirst into her apartment! But the sanding went well. As soon as I had only put to brush strokes down the door rattled. The lady tried to open it! I was glad she couldn’t. I got down, unbolted the door and opened it, and had a chat. She was nice! And she had another exit so she wasn’t locked in.

I painted the door and then decided I had spent the amount of time I could spare. I gathered my tools and said goodbye! I hope to see these people again when the shop opens. That should be next week! Cool! 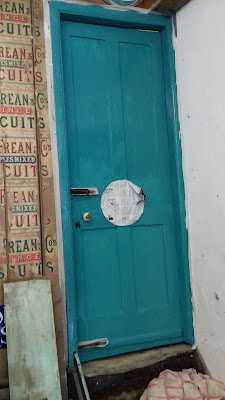