It was that time of the year again! The PCG was in town. It's always nice to reconnect with my first caving club. There still are quite some members that were there when I joined in 2009! And some that had joined by the time I left in 2013.

They drove up on Thursday. I had to work on Friday, and would be visited by Monique on Sunday, so that left Saturday for the PCG. And they would visit the Parys mine! I had only been there once, even though it's a fine mine.

We would meet at ten at the mine. I started changing. I know they have a hut for changing in, but I didn't feel like lugging all my kit to it first. My boots are already a kilo each! And Dave had said there would be SRT involved.

Then a car with familiar faces in it arrived. It was Dave and Rich! And behind I saw another car, in which I discerned Alex, and then Tara. Hugs were exchanged! And I was introduced to a second Alex I hadn't met yet. The men mentioned Dave and Keith wouldn't be coming. The day before they had gone to Cwm, and Keith had sprained his ankle, and Dave had forgot to give back the key. So Keith couldn't walk, and Dave would first drive to Conwy Falls and would be too late to join us. Oh dear. The silly man should just have given the key to me! But too late now. Other Dave would not join us either; he's not been healthy enough for such exploits for years.

The men of the Parys Underground Group who would show us around, Olly and Brian, suggested we do the standard through trip. But first take us to the viewpoint from which you can see the surface workings. Sounded good!

We admired the pit and got ready to go back to the cars. Suddenly Rich shouted out to Dave. He was having spasms and was holding on to the wall in order not to fall over. Oh dear! Then he fell over anyway. That's one of the reasons he doesn't go underground anymore! But now we had to sit him down. The good thing was that Rich, who is fully trained as a nurse, looks after Dave very often and knows what to do. We sat him down and gave him some water. Then we brought him to the car. He'd wait for us there while we would be underground.

We all changed and went in. It's a nice mine! With a lot of small ladders and handlines and drippies and crawly bits and funny-coloured puddles and whatnot. It was a bit Wheal Jane-like with its funny chemistry! Olly and Brian were very knowledgeable about it all. They were still learning new things, though! There was a pipe somewhere of which Olly had thought it was for pressurized air, but Brian managed to convince him it was for water. I also wondered about some twist of reed of which they had always assumed it was a rope, but which on closer inspection was probably a kneeling mat. 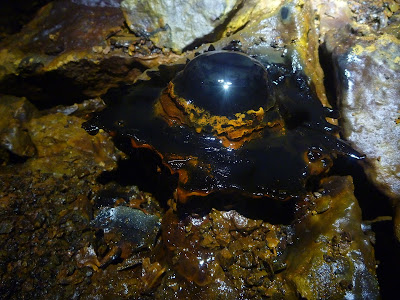 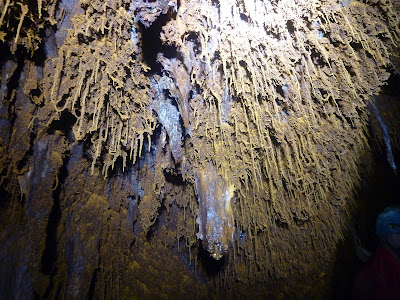 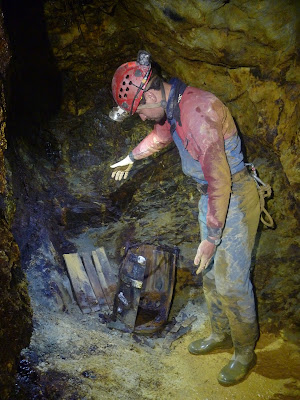 Richard with a barrel 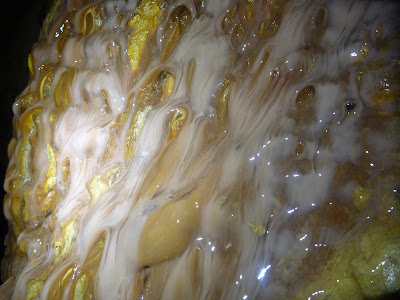 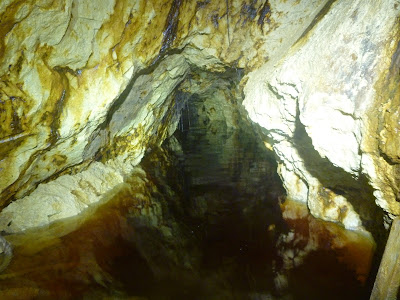 
We went through the wet bit that's unavoidable if you want to go into Mona mine and come out from Parys mine, and then went back skipping one of the sights as we knew Dave and Dave would be waiting for us. We came out at about half past three. It had been a nice trip! And outside we found one Dave. The other had brought Keith, ankle and all, to hospital in Bangor.

When we were all changed we decided to all drive to Bangor and meet up there for a pint. We did. I didn't find the other Parysians but I did flag down Dave and Keith, who was in a brace and on crutches. Then we got a message from the others; they were in a pub. We joined them. In there we decided we would go for dinner in Llanberis.

I went home for a shower, and later drove to Llanberis, to the Royal Victoria. I was the first! Dave wouldn't join;  he wasn't feeling well. The others were there, with the addition of Lionel, who had spent the day in the mountains. It was nice to see him! And the dinner was a bit weird; they have really strange portion sizes in there. My side dish was larger than the main. And the waiter threw two pints of beer over himself. But it was nice! I'm sure next year they'll be back; I hope I'm still there to greet them!
Posted by Margot at 15:24