Annual day in the field

In autumn we take our second year students into the field to have a look at the direction ice bodies that shaped Snowdonia in former, colder times were travelling, and what that means. I've now blogged about that trip many times! In 2017, 2015, and 2014. I think I was too busy doing research in 2016. It is becoming a bit routine-ish now! Which is not bad. Then you know what to do and how to do it and you can enjoy it. Although every year you do things in a way of which you think afterwards it wasn't ideal! But well, one is fallible.

The weather forecast for this year was blustery but dry. Good enough! And the tides were such we could start in the mountains and go to the beach later, which is the way I prefer it.

We went. The first pleasant surprise was that all students were approximately equally fast. Sometimes the first person has to wait forever for the last to arrive, but not this year! And the second was that the water of the lake (Llyn Llydaw) was unusually low. That's great; much more rock exposed! And the often-submerged ones tend to have the nicest evidence of glacial motion. And the students were quite switched on! That was great too. Of course there were some who ignored my pleas and moved around a lot, or those who were measuring things that didn't have anything to do with glacial motion, or who used the compasses in inexplicable ways. But that's what we supervisors are for!

Before we went back down we packed up a tent someone had left. t was completely collapsed and clearly abandoned. The things people do! And when I say 'we' I mean 'other people' but I had the final responsibility for the field trip so I felt obliged to keep my eye on the students, not garbage. 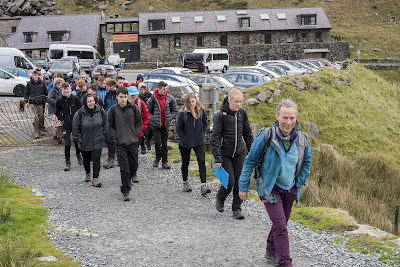 Setting off from Pen-y-Pass. Pic by David 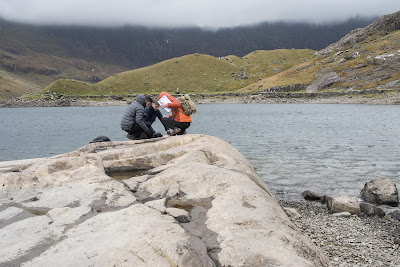 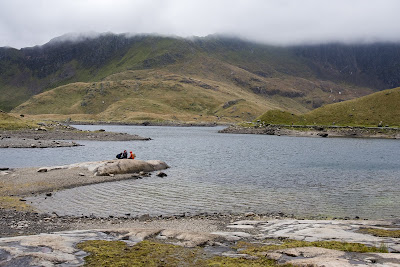 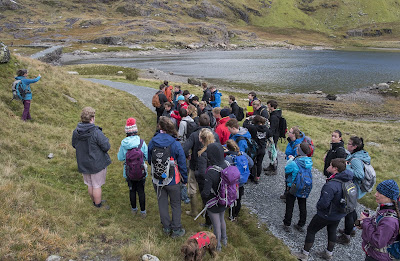 Doing the debrief. Pic by David

The students were done rather early so we had an extra long lunch break in Llanberis. Nice! We always eat in Pete's Eats but if you show up with a group of 40 people they struggle to feed them all within the hour.

After lunch we were off to Aberogwen. There the students were quite on the ball too! And the sun had come out. Nice!

We did the data gathering. Normally we then have a look at some sediments deposited in a proglacial lake, but, believe it or not, our view was obscured by a group of Cypriots with fluorescent helmets. Oh well, these fine sediments are bonus anyway! We called it a day. And then I had 14 datasets to put into excel, check, and process! Let's hope the data is as beautiful as I hoped it would be when I saw the lovely conditions in the field! 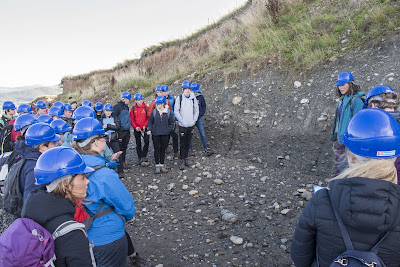 Doing a spiel on the beach. Pic by David
Posted by Margot at 09:25