Plans became reality! We had decided to take the freshers into the field; Anglesey is internationally famous for its amazing geology, and very pretty too, so we figured we should flaunt that. We quickly designed a first year module with half-days in the field.

We wanted to go through the geology in chronological order; our oldest site was Llanddwyn. It’s a peninsula that turns into an island at high spring tide. The first day we would go into the field it was, you guessed it, high spring tide. Oh dear! We decided to stay indoors and do some theory and some rock practical with the students. And the second timetabled slot we went to Llanddwyn after all. It was high tide again, but not spring tide.

We started at the pillow lavas. They are nice! Then we saw the results of more explosive volcanism underneath that. We even saw a preserved volcanic bomb!  And then we saw the sedimentary rocks. The last thing to see would be the mélange at the end of the island. But it was already late! We figured it would be silly to NOT visit the best bit though, so we were resigned to being late and went. 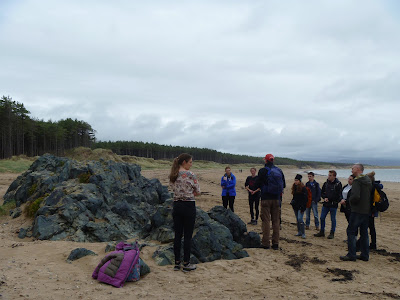 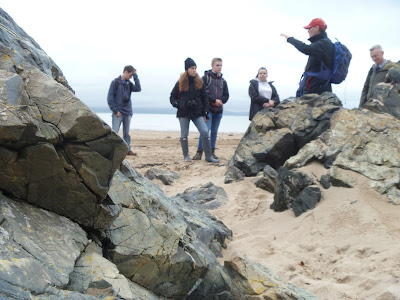 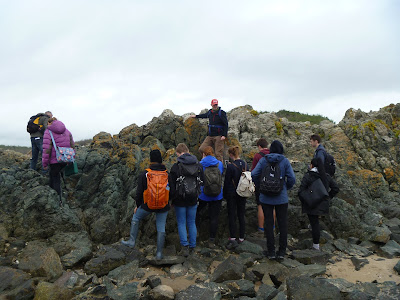 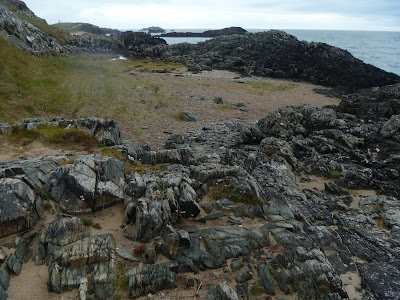 Sedimentary rocks! In a pretty setting.

Given that I had only recently been there, and had spent quite some time there, I had stuff to say. I quite struggled to get a word in sideways though! Dei and Jaco were being quite vocal. I suppose that’s the price you pay for not claiming the foreground from the very beginning. I have plenty to do; I’m happy for the men to take the lead. But that does mean that when you have something to add, you have to pretty much forcefully shut the men up to be heard. The other way around it wouldn’t work that way. There’s still a long way to go! Suzie was with us too; she felt the same way.

We walked back. It started raining! So far it had luckily been dry.

The next time we will go to Porthwen. I’ll have to make my mind up in advance. Do I let the men do the work or will I open my mouth from the beginning and claim the stage? I don’t think being half-hearted about it will work!
Posted by Margot at 06:44