It was a week for the ThursdayNighters again, rather than the dig. But I was a bit apprehensive about it! The venue had been chosen: Rhosydd, which is quite a walk. Before you even get to then entrance half the evening is gone! So the day before I decided to just walk to the entrance with the guys and then peel off. I would get a nice walk out of it! And some nice social time. But I would be in bed at a reasonable hour. I’ve actually done that before, but last time I didn’t decide until I was at the top. This time I decided beforehand so I didn’t carry all my caving kit up! That was quite comfortable. I had brought a flask and some sandwiches.

When I got to the parking lot I was the first. Which was OK; I had marking work with me. The first car that showed up belonged to a new chap, Gary. He was nice! Then Ed, David, Edwyn, Jason and Don appeared. Don lives in Stourport but has a cottage in Tanygrisiau, but he can’t afford two houses and had just sold the latter. He and his wife had decided the TyG house was not quite what they wanted, and too far from the kids. So it had to go! But that will mean we will see less of him.
We walked up. It was a lovely evening! When we came past Conglog, Ed and Jason peeled off. Jason had not yet been, and it’s a small place. They could quickly see it and then rejoin! They knew where the others were going. 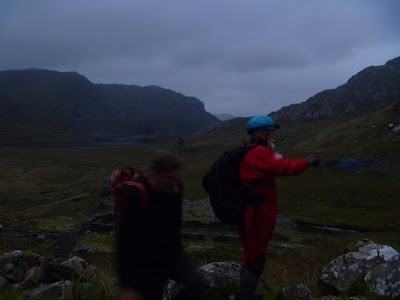 David and Don looking at Conglog 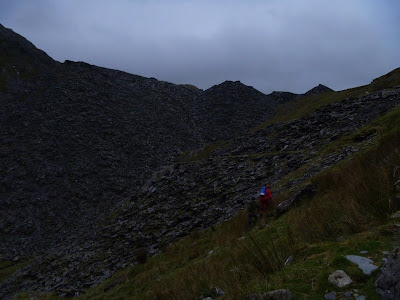 Ed and Jason peel off

When we got to the entrance the others got ready. It was quite dark by then! And before everyone had their wellies on and their hats on, Jason and Ed reappeared. I said goodbye and walked off! Before I came down the plateau I sat down for a sandwich and some tea. Then I walked back. I needed my headtorch from time to time, but generally I was fine. It was a foggy and atmospheric! It was a great walk. I was back home at about quarter past nine. Early enough to make sandwiches for the next day and be in bed at the normal hour!

The next day I would have a lecture at 9AM, a meeting from11 to 1 and a practical from 1 to 4. A hectic day! I was glad I was well-rested for it…