With my new commute (well, new, it's almost been six months) I produce a lot more sweat on the way to work. Some time ago, I biked into the office early in the morning, then back to Bangor for a lecture later that morning, and then back to the office. And, of course, home later. By then I was quite smelly! So I decided to have sacrificial sweat clothes and tidy lecturing clothes. And wearing different clothes for biking is quite an un-Dutch thing! But the Dutch bike up against fewer hills on average then I do. And I won't go all Middle-Aged Woman In Lycra*; I think just a different T-shirt and perhaps a jumper will do. But I hope it will keep me a bit more presentable! 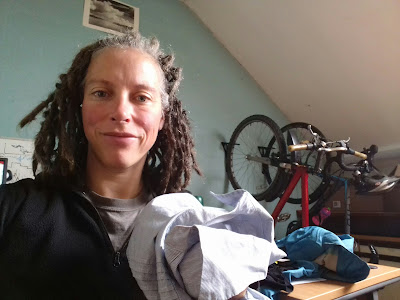 *: according to the OED I won't be middle aged for a few years either
Posted by Margot at 07:52