Last year I did the highest Welsh course the university offers. After that we should be OK! And I'm clearly not so I hoped to do something equivalent this year. I was pondering just doing the same course again. I can use the repetition! But then our tutor offered something different: Sgwrs a Stori (conversation and story). It's not a course in the classic sense of the word; there is no syllabus, and there are no grammatical exercises and such. It's just us talking to each other, directed by Elwyn. We just do small talk, or discuss the state of the world, or something Elwyn has found on Youtube, or whatnot.

The first time I walked in I thought I was in the wrong room. I had got the impression most of the old course would now do this! But I was the only one from the course. Oh well! I recognised some faces from other Welsh-themed encounters. But Elwyn was also a bit disappointed and decided the course would run until Christmas. We'll see after that! I can still do the second half of the Cwrs Meistoli on repeat. No problems with coming in in the middle of it!

One thing we will be doing in Sgwrs a Stori is discuss a book. Elwyn chose a book and every week we all read a chapter. Then we'll discuss it in class! Quite nice, having a book club. I don't share Elwyn's taste in books but this one is fine so far. And quite regional! The author is from Anglesey and by the looks of it, the whole book is situated there. We'll see! 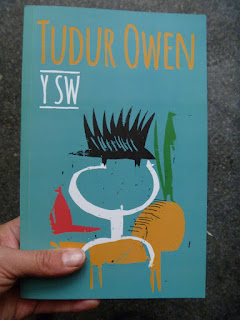