First home-grown veg on the plate

When you start growing vegetables you hope to eat them too some day! In the case of some vegetables, that can take a while. My courgette plants have only just starting to flower. But some things go faster! My modest spinach crop did enrich a few cheese sandwiches. The plants have gone into bloom now and that means they don't have much energy left for making leaves, but another sandwich should be possible. 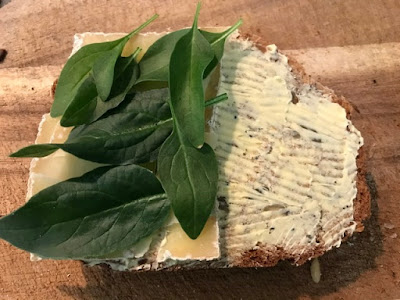 I also couldn't resist eating a carrot when I planted the first ones outside. It was still quite young and small but it was tasty! And that was already as much as the entire crop of 2018. More of that to follow.
I announced the first peas a while ago already. By now I have had two pea-enhanced main meals! Not all pods are ripe at the same time, so even though I think all my pea plants together could yield a full pea meal, they could only do that if I stored the first ripe pods until the last ones were ripe too. And I don't want to. So I ate the fist partial harvest as an addition to a bean-containing curry I ate. And the second batch to boost a meal of broad beans I had bought on my parking lot round. It's nice to eat veg that was still on the plant minutes before! I look forward to more harvest. There'll at least be a third pea round. And what would be next? It could be the cabbage! Or maybe the chard... watch this space. 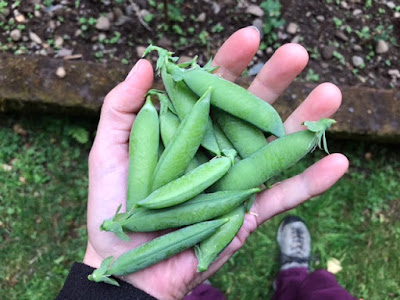