The joys of not going to the supermarket very often

I said it before, I eat differently now! I try new things. But not only because I want to broaden my horizon; also because I try to avoid going to the shops too often. The shop is the only place where I'm indoor with other people (except that one time I went donating blood, and the one time I went to Screwfix) and if I can keep that limited in frequency I will. So before the pandemic, I would often decide on the day what to eat, and then buy it on the way home. Now I buy in advance.
Generally, I have a plan and it works, but sometimes it doesn't quite work out. Sometimes you just end up with some ingredients that you had not intended in that configuration. And first of all; that probably would not have happened before. But also; if it did happen, I would just pop to the shop and buy things to combine with these ingredients. Now I don't! As long as I have enough veg I will make it work. So if I am left with an ingredient I just google 'recipe ingredient' and see what comes up. I have, for instance, made pearl barley with mushrooms and courgette because, well, I found myself having mushrooms and courgette. (And pearl barley, evidently.) I had intended a quiche but there wasn't enough veg for an entire quiche. A few days earlier, I had accidentally cooked more potatoes than I could eat in one go, so I had eaten them with some of the veg originally designated for the quiche the day after! So that had depleted the veg pile. But it was still enough for this recipe! And my oyster mushrooms had just produced a second harvest so that was convenient.
I also had a variation on aubergine parmigiana because, you guessed it, I had aubergine and tomato. That’s not enough variation for a pasta or pizza, and I had no coconut milk or onion so the aubergine curry couldn’t  happen either. But the result was lovely! 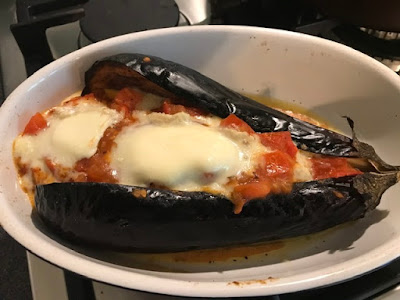 Sometimes things get a bit bizarre; at some point I had Brussels sprouts but no potatoes. So I had them with spaghetti. And that's not a recipe I will reproduce when the pandemic is over. But it did the job! It was a perfectly healthy meal and it filled me up. So altogether, I am quite liking this new style cooking. And the odd spaghetti-with-sprouts mishap makes you like the more successful adventures even more!
Posted by Margot at 10:33