We can combine biking and walking! I had found no rule against it, and when a friend said he had phoned the police to explicitly ask, and had got the answer that it was OK, I knew what to do. Bike into the Ogwen Valley and do a walk a bit further from home! I was starting to retrace my steps in the Carneddau a bit much. And there was a hill out there that not only I had never climbed; it also had the coolest name of any of the hills around here. You guessed it; it's called Pen Llithrig y Wrach. And that means 'the Witch's Slippery Head'. Which I think is hilarious! So that's where I set out to go.

On a very sunny day I biked into the valley, and parked my bike at the start of the public footpath. I was a bit startled to find my groin felt odd! Some sort of saddle soreness I had never had before. I've had that bike since forever, but I did put a new saddle on less than two years ago. Maybe it was a move with disadvantages! But I had faith the feeling would subside soon and it did. 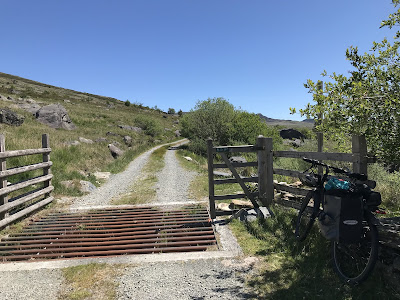 Park the bike at the start of the public footpath

I would first walk east a bit as the nearest hill to there was y Braich; I intended to come down there. And it took a while to traverse the valley of Afon Bedol and get to the foot of the hill, but that was OK as it was lovely. It was great walking weather: warm but not too much so, and I was in a wide plain with nobody around. 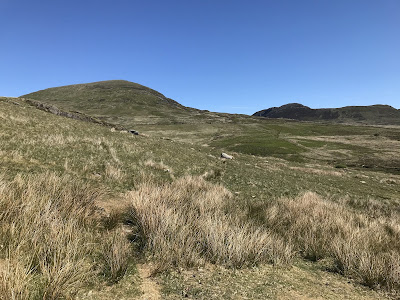 The round one is the Witch's head! 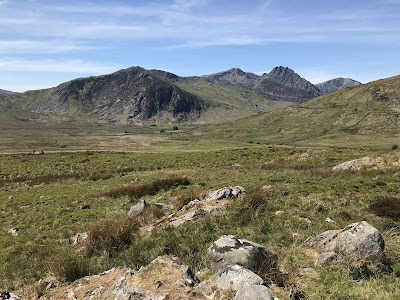 Looking back across the plain to Tryfan in the distance


Halfway up the flank of the hill I had lunch. I was hungry by then! Then I continued my way up. When I get my eyes on the cairn at the top I suddenly saw a shirtless man appear. He was a bit startled. And then I saw a lady. She wasn't wearing an over-abundance of clothes either. I decided to stop and admire Llyn Cowlyd for a while. When I had properly appreciated its beauty I continued my way. I expected to find fully clothed and slightly blushing people, but there was nobody to be seen! That was quiet a feat. It's such an open landscape. No idea where they vanished to.

Now I was on the slippery head of the witch! I took a selfie even though you can't really see a mountain on a selfie you take on its top. But it was the idea that counted. And then I headed west; I dropped down back to the river, and then up on the other side, to Pen yr Helgi Du (the head of the black hunting dog; they are good with names in this neck of the woods). On the top there I had another drink. Then I headed back down y Braich. That would be a long and rather uneventful stroll. But that's ok! 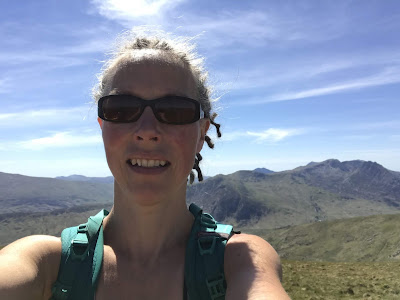 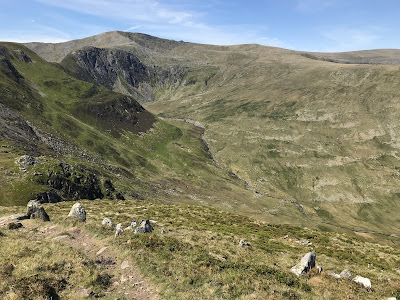 Looking into the next valley along, where Llyn Llyffant is
I got back to the bike, and then just biked back. A good day out! And I could do more of that. I like having a bit of an action radius, assisted by my bike!
Posted by Margot at 08:56