My repair-the-toilet project wasn't going to be a quick thing. Removing the cistern had been a nightmare with all the metalwork rusted beyond recognition! But when I had the cistern, and all that came with it, completely dismantled it was time to see if I could rebuild it all. But the first thing I did was paint the wall behind the cistern; the painter hadn't been able to reach and this was my chance. But that was a doddle.
Now for the actual issue: the toilet flush. I was religiously following the instructions. They were clearly meant to be universal; all was in pictures! No verbal explanation. I prefer the combination but hey ho.
I started with the fill valve! That was easily screwed into position. Then the actual flush. No issues there either. And the set came with its own plastic bolts and nuts to put the cistern back. But then the instructions said that I should adjust the settings on both fill and flush. What? They were in position! How could I adjust them if I could barely reach them? How big do they think a cistern is? So I dismantled the whole thing again. I made a bit of a guess at how high I wanted the water level to get. Not too high! No need to use more drinking water than necessary. The flush didn't want to collaborate. I left it at factory settings. 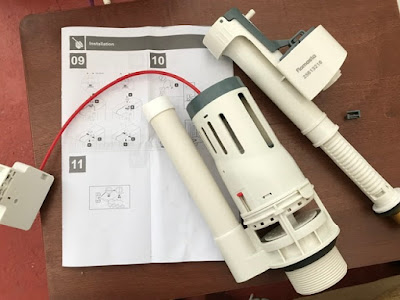 So how to adjust these...
I put it all back and tried it. And it wasn't OK! The cistern slowly drained into the pan when it shouldn't. Annoying! This mechanism was brand new. It should just work! Some Googling suggested this is the sort of thing that can happen when the washer is old (it wasn't), the cradle it fits into is dirty (it wasn't), or when the cistern fills too fast (it did it too with the water disconnected so it wasn't). Hm! I posted a question on a plumbing forum. How to sort this? I really don't want to have a leaky toilet. Drinking water is a precious resource! Not to just be lost into the toilet pan.
I figured the plunger didn't come all the way down. Would it be too light? It's only gravity that lowers it! And it's all flimsy plastic. So I figured I'd try to weigh it down. And an easy way of doing that would be wrap some soldering tin around the shaft. So I did! And it didn't work. But I really couldn't find another possible reason why it wouldn't work. So I just added a second loop of tin. And put everything back in place. And it seemed to have done the trick. I did a few tests; put water in the cistern, make a pencil mark at the water level, leave it for hours and see if the level had changed. When all tests were OK I put the lid back on. I'm still not convinced I quite understand what the problem was and whether I've solved it! Was it really a weight issue? Did I accidentally tweak something else which solved it, and is the tin strictly decorative? Oh well. I was quite fed up with not having a traditionally functional loo, and the bathroom being strewn with tools, and having to spend time on this. So I decided to leave it as is. If something goes wrong again I can revisit this issue. For now, taking the cistern off will be a doddle, and I now know more about this loo than I ever expected! 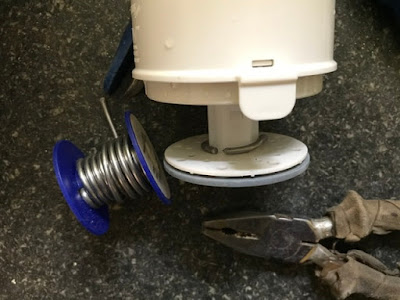 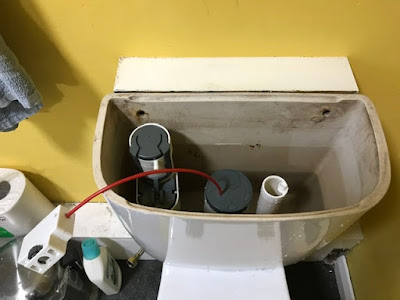 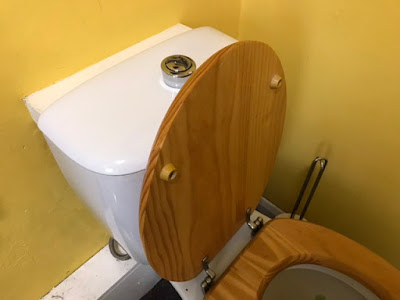 Looks all sophisticated again
Posted by Margot at 08:26