When you buy a house it tends to have a loo in it. And do you necessarily know much about  it? No, not really. I sure didn't. It worked; no further questions. But it developed a habit of having water run down when it shouldn't. And that was easily remediated by a second push of the button. Until it wasn't. And then it was time to have a look at the mechanism.
I had sorted a loo before! When I lived in Plymouth. I had managed to make that a success. Some of that must have been due to that the metalwork holding it all together wasn't all rusty; I don't mention any difficulty with rust when getting the cistern off. And some of that success doesn't help here as the issue was something entirely different. But here we go again!
I took the lid off. I didn't know much about what I saw. But it did look a bit old! Probably best to see if I could just replace the whole mechanism, as repairing it might be a bit futile. I am not good at it, and would there be spare parts out there for such outdated equipment? So I googled a bit and found that Screwfix sold these mechanisms. And I found one that I thought would fit. 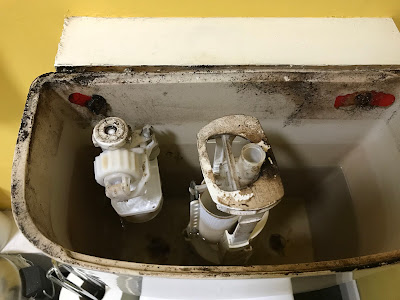 What I found when I took the lid off
Going to pick it up from the shop was weird. Outside the entrance was a gazebo with a bloke with a two-way radio. He let people in if someone else came out! They had two tills open. This allowed for plenty of distancing.
Then the real work could start. I had noticed the cistern was fixed with very, very rusty screws! This would get interesting.
After some trying I figured I would get the cistern off if I would manage to get one of the top screws to reveal enough profile again to accept a screwdriver, and if I sawed off one of the bolts at the bottom. The other two seemed OK. And it worked! A gimlet scraped enough rust out of the rusty screw for my screwdriver to get a grip. And my metal saw sorted the bolt. Some pliers allowed me to take the water supply off; this had been tightened beyond being able to do this by hand. So that was one item off: the refill mechanism.
Now I needed to get the actual flush off. That wasn't straightforward either! It's screwed on with a big plastic nut-like thing; much bigger than any wrench I have. I tried a glue clamp but that didn't work. In the end I managed to improvise a sort of chain wrench with ducttape and a hammer. Did the job! 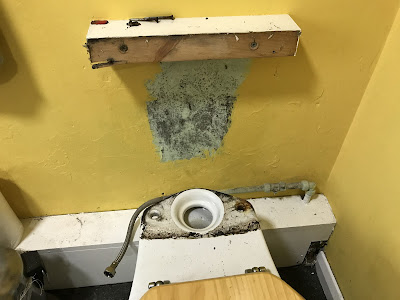 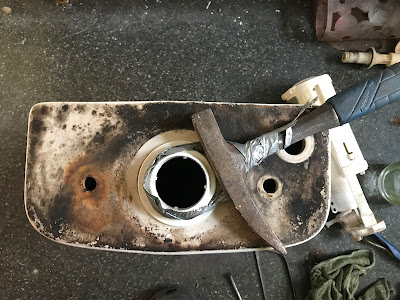 Get the flush off with a smart trick!

I also found out the bottom bolts keeping the cistern in place had not only had nuts below the pan, but also between cistern and pan. And these were rusted in position too, of course! Would I manage to sort that with penetration oil and force? I could use spanners on the nuts, but on the other side I could only try to steady the bolts with a screwdriver. And you can imagine how easy that is after (probably) decades of rusting. So in the end both bolts got sawn.
It is supposed to be a doddle to install the new mechanism! Removing rusty things, however, is a big challenge. I was glad when that was done. Would things get easy then? Stay tuned... 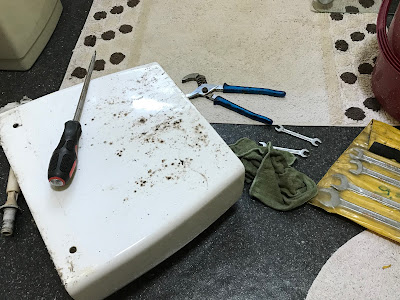