It was the second weekend of being allowed to meet people! And I didn't quite go as far all-out as in the first weekend, but I saw a fair number of people. The same ones, mostly! I did another Saturday walk with Chris, and another Sunday bike ride-plus-walk with Kate.
The weather forecast for both days was a bit iffy so no enormous walks were planned. With Chris I thought we could go to the source of the river Cegin; with Kate I would walk the Crimpiau. They're not big, but nicely in between our respective domiciles, and not very well-trodden. And beautiful! I had been twice last year, both with the climbing club and with Roelof. And I was keen to not wear myself out as much as the weekend before so a shortish walk would do me fine.
The walk with Chris went fine! No rain materialised. What did materialise was signs at the start of public footpaths, politely saying 'go away' so the source of the Cegin remained unexplored. We pretty much did the same walk as the week before. But that was OK! 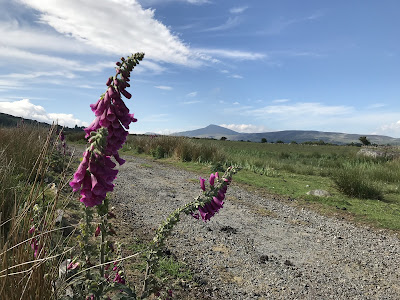 Nice foxgloves on the walk with Chris
The walk with Kate went well too. Some rain did materialise but that didn't spoil the fun. There was nobody around and the views were great! And I didn't wear myself out, as I felt OK to go for a run after I got home. I hadn't run the day before; I had actually worn myself out during the Chris walk (not sure how, but I had been awake in the middle of the night and that may have had something to do with it) and had ended up with a clanging headache. 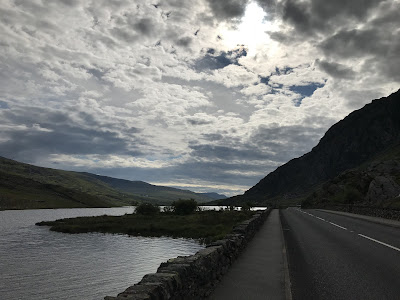 On my way to the meeting point 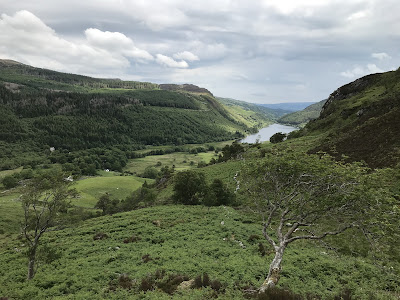 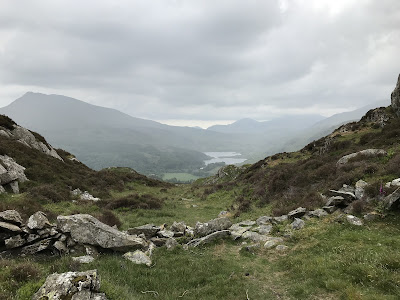 Llynau Mymbyr in the rain
As a bonus, when I was making my way back along the old road from Ogwen Cottage, I suddenly heard my name, and Martin appeared from behind. He had been out on his bike too, had stopped for a drink, seen me bike past, and had decided to see if he could overtake me. And he could! So together we biked back to Bethesda. So I almost had the full score of people from the previous weekend! Very nice. Only days later we would get another lockdown review; I don't expect much to change, but as things are I am clearly managing to keep myself socially occupied!
Posted by Margot at 08:32