This is a good time to experiment with food. I have started growing the stuff, and I try to broaden my horizons a bit. I have a bit of a penchant for cooking the same recipes over and over again. That's just the easiest! But now that I am home every dinner time I can try some other things. And then when lockdown ends, I will have more recipes in my repertoire. Thing I haven't done before don't have to cost more time!

One thing I tried was making my own pie crust. I like making quiches and such! And I tend to buy ready-made pie crust dough. But that's always done with white flour, and has unnecessary packaging, and is probably more expensive than doing it yourself. So I Googled a recipe and gave it a go.

For shortcrust dough you need cold butter and cold water, so you need prep time. I put the needed amount of butter int he freezer the day before. And I put a little bowl of water in there too. I don't think I have ice cube shapes!

The day I made the dough I had to first thaw out the bowl so the ice let go. Then I had to smash the ice to make it manageable by the bread machine. Otherwise it was a doddle. Plonk everything in the machine and press 'start!

It worked out, I made a quiche! And it fed me for five days. I liked it! The crust was a bit sloppier than intended but maybe I should have baked it without filling first and I couldn't be asked. Maybe it was a bit thin. But it tasted good and I had made it myself! And because a bread machine can't handle small amounts I now have half the dough waiting in the freezer and can make another quiche with that soon. Nice! 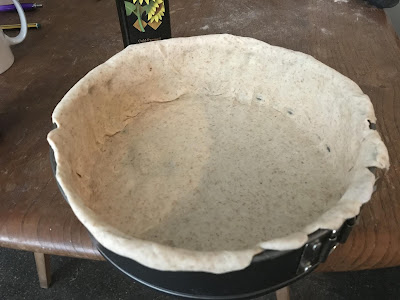 Crust!
Another thing I did was try to grow mushrooms. That was a mixed bag. I had decided to first try the standard ones, aka button or champignon mushrooms, but that failed. No mushroom to be seen! But in the meantime, the oyster mushrooms started growing without being prompted. I clearly need some practice with this! But I got me soem mushrooms; what to do with them? Well: eat green Thai curry! Or the westernised version. I don't think an actual Thai would recognise the stuff you can buy in the village shop as Thai curry paste, but that doesn't matter. If it makes a good meal I'm happy! And what was my verdict? Certainly a good meal! And very quick and easy. And the pot of paste gets me some eight meals so I'm not done with it yet... 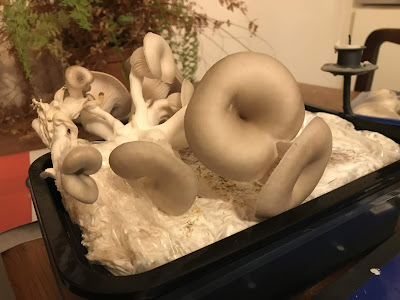 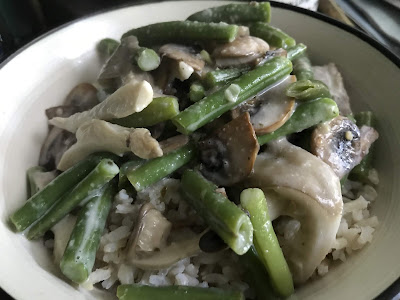